A Labor Resurgence, with Local 117 Leading the Way

There were no strikes at Local 117 in 2014, no burn barrels glowing at 2 A.M., no members standing their ground as massive trucks tried to nudge their way through our lines.  Yet despite a lack of obvious labor unrest, our Union’s impact on the lives of working families was as significant last year as in any year in recent memory.

Members of Teamsters 117 won important victories – through progressive legislation, through political action, in negotiations, in arbitration, and perhaps most significantly, by bringing hundreds of new workers into the Union.

The year kicked off on the heels of a win for workers in the city of SeaTac.  Voters of the town had passed an ordinance that raised the minimum wage in an around the airport to $15/hr.  Finally, baggage handlers, fuelers, shuttlers, hotel workers, parking attendants, and concession workers – the people who work behind the scenes to make our region a number one destination for business travelers and tourists would be getting a little relief.

Although corporations, most notably Alaska Airlines, cynically tried to block the raises for workers at the airport, thousands have already benefited from the new law, and the fate of hundreds more will ultimately be decided in the courts.

Workers rode the SeaTac victory into the city of Seattle, where a coalition of labor, faith, and community groups helped achieve the historic passage of a $15/hr minimum wage law.

Local 117’s role in that campaign, as in the SeaTac initiative, was key to its success. Members attended strategy meetings, testified at public hearings, met with politicians, and spoke at rallies and other public events.  Secretary-Treasurer Tracey Thompson chaired the coalition of labor unions that helped negotiate the agreement with the city and business.  The outcome was profound.  Thousands of workers in one of the wealthiest, most thriving economic environments in the world, will finally have a chance to earn a living wage.

Some Local 117 members questioned our involvement in the campaign.  Why expend the energy and resources when Union members are already making more than the minimum?  Make no mistake - the fight to raise the minimum wage is a Union issue.  Not only is it morally the right thing to do, but by raising the floor, we will be able to negotiate stronger contracts with higher wages for all Union members.

Secretary-Treasurer Thompson played a critical role in those negotiations, and she took the lead on three other major negotiations over the summer as well. 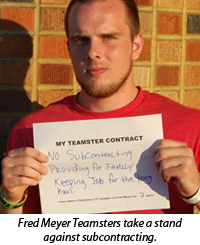 For decades, Local 117’s grocery contracts have served as the foundation of our Union, providing job security, retirement security, and family wages and benefits for over 1000 members in the industry.  But automation, buyouts, and corporate mergers are putting those contracts and the members they protect at increasing risk.  Despite the challenges, our grocery negotiations were an unconditional success.  Through member strength and solidarity, and under Thompson’s leadership, we were able to secure once again some of the strongest contracts in the country for Teamsters in the grocery industry.

We also achieved an important agreement for Teamster taxi drivers in 2014.  The accord, negotiated by Thompson, Business Representative Dawn Gearhart, and members of the Western Washington Taxicab Operators Association (WWTCOA), was not over wages, hours, or working conditions, but rather regulatory changes in the industry. The end result helped create a level playing field in the city of Seattle for taxi drivers, who have seen their livelihoods threatened by multi-billion dollar Silicon Valley technology companies that are making their profits by exploiting workers and refusing to play by the rules.

Perhaps the most significant negotiations of 2014 – involving members at the Department of Corrections (DOC) – ended in a stalemate, as the DOC once again refused to adequately recognize the challenging work of our state’s correctional employees.  But this contract cycle, thanks to an intensive campaign to promote prison-worker safety, we had an important, new tool at our disposal:  interest arbitration.

Interest arbitration, as achieved through an agreement with Governor Inslee, enabled Local 117’s legal team to present the case of Washington State correctional employees before a neutral, third-party arbitrator.  The interest arbitration hearing lasted eight days and involved dozens of witnesses, a video presented by the Union, and hundreds of pages of documentation.

The end result?  Through the arbitrator’s award, were able to win 9.8% wage increases for correctional workers over the 2015-2017 biennium, the first raise for DOC employees in six years and one of the highest increases for any state employees’ bargaining unit.  Finally, a little respect for the brave men and women who put their lives on the line every day to protect the public.

Despite the good news, our effort to win a fair contract for correctional workers is far from over.  Before these workers can see their wages rise, the Washington state legislature must vote to fund their contract.  That’s why we are organizing a Lobby Day event that will bring hundreds of corrections employees and other Local 117 members to Olympia on January 27, 2015.  You can join us for the event by registering on our website here.

Perhaps the most exciting part of our work this year has been in organizing. We brought new members into our Union from the parking, steel, warehouse, cold storage, construction, and transportation industries as well as the public sector.  We used both innovation, as in our efforts to organize independent contractors into the new App-Based Drivers Association, as well as traditional NLRB and PERC elections.  Workers showed incredible courage and determination as they fought to become members of Teamsters 117.

Our success in organizing has been part of a deliberate strategy to grow the Union.  To that end, we hired a research director and three new staff organizers.  Dedicating more resources to organizing has paid off – in just two short months since expanding the team, we have won organizing victories with dozens of workers at two more companies – Mutual Materials and Industrial Container Services. 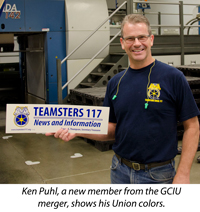 We also grew thanks to a successful merger with the Graphics Communications International Union (GCIU 767- M), which brought over 400 new members who work in the printing and publishing industry into Local 117.

In all, hundreds of workers joined our Union in 2014 – that’s hundreds of working families that will benefit from a Teamsters contract.  More than any strike or negotiations, grievance or arbitration win, these organizing victories will help us build density in key industries so that we can continue to win strong contracts that protect and expand the rights, wages, and benefits of all members of Teamsters Local 117.