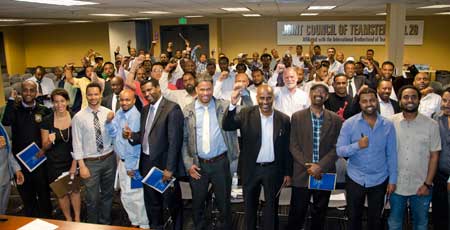 Uber and UberX drivers met in Tukwila today to begin the process of forming an association which will work with Teamsters Local 117.

The drivers voted to approve by-laws, and they elected a 7-member leadership council that will run the day-to-day operations of the organization.  Job security, wage gouging, public safety, and a refusal of transportation network companies, such as Uber, Sidecar, and Lyft, to adhere to local laws and industry standards compelled the drivers to organize.

The new association will be called the App-Based Drivers’ Association (ABDA).

“We congratulate the drivers on taking this courageous step,” said Tracey A. Thompson, Secretary-Treasurer of Teamsters Local 117. “We intend to use our expertise in representing workers to ensure that the drivers are treated fairly and their concerns are heard.”

The new association plans to tackle a number of issues. Drivers want to bring transportation companies into compliance with municipal, county, and state regulations and laws.  They want sufficient liability coverage to protect themselves and their customers, and they want companies to end the predatory practices of disconnecting drivers from their apps without cause and arbitrarily gouging drivers’ pay.

“Today is an historic day for all app-based drivers in King County,” said Daniel Ajema, an Uber driver, who is one of the organizers of the association.  “We set a framework for the future and for the workers who follow us.  From now on, our dignity will be protected in the workplace.”

“The association will give us a voice, more control over our working conditions, and an opportunity to be heard.  Teamsters will help us with that.” said Ydediya Seifu, another organizer and elected leader.

Sign in with or
Don't have an account? Click here to create one.
Please check your e-mail for a link to activate your account.
Uber drivers are getting organized! Drivers vote to form new association.
Transportation Network Drivers Vote to Form Association
TEAMSTERS POWER