Teamsters at Sysco Vote 150-0 to Authorize a Strike

Teamsters at Sysco Vote 150-0 to Authorize a Strike. 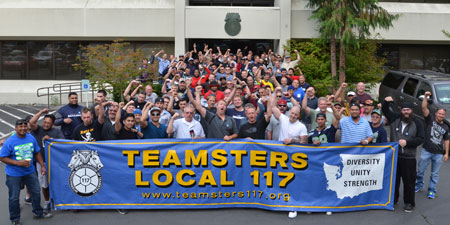 “Record attendance,” said Local 117 Secretary-Treasurer John Scearcy, to resounding applause.  “This is serious.  The company is coming after us, but we will be ready.”

The Union hall was packed with Teamsters on Saturday who work at the massive food service conglomerate, Sysco.

We have been in bargaining with the company since July and the temperature of the bargain has reached a boiling point.  Sysco has been playing hardball, coming after members’ hard-earned medical benefits, retirement security, wages, and more.

In the last scheduled bargaining session, our negotiations team made a good faith proposal and we were ready to stay at the table until bargaining was completed, but the company simply walked away from the bargaining table.

The bargaining team called the group to the hall for Saturday’s meeting and, in an incredible display of solidarity, members voted 150-0 to authorize a strike.

With the unanimous vote, we've sent a clear message to the company that we stand together and are united in our demand for good faith bargaining.

Thank you to the extraordinary work of our Union bargaining committee: