Check out the new issue of your Union's Teamster Talk newsletter!  This issue contains articles on:

For a print copy of Teamster Talk, talk to your Business Representative.

Primary Ballots are in the Mail!

By now you will have received your Primary Election ballot. I want to emphasize the importance of voting in this election, and to ask you to consider supporting strong candidates in your district who have earned our endorsement.

Every year, important decisions are made in Olympia that affect Teamsters and our families' livelihoods, our wages and health care, the safety nets if we get laid off or injured at work, and perhaps even our jobs themselves.  That’s why Teamsters Local 117 works to hold state lawmakers accountable.

But in recent years, a Washington, D.C.-style political gridlock has taken hold in the State legislature.  Extremist legislators advocating for corporate special interests and the selfish few at the top are blocking all efforts to make sure Washington State’s economy works for everyone.  As a result, wages are falling behind the rising cost of living, our schools are underfunded, and our roads, bridges and infrastructure are falling apart.

Starting with this primary election, we have a chance to change things for the better.  We can support candidates who support our priorities.  We have compiled a list of all these recommendations here. 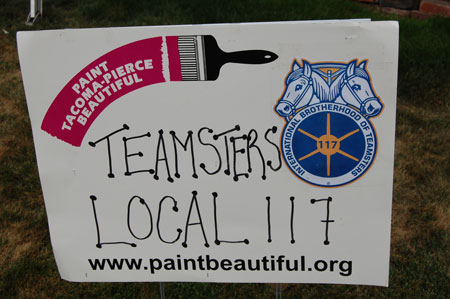 We are looking for volunteers who would like to help out with our participation in this summer's Paint Tacoma-Pierce Beautiful program.

Founded in 1985, Paint Tacoma-Pierce Beautiful organizes volunteer crews to paint the exteriors of homes of low-income, elderly and disabled homeowners in Tacoma, Lakewood, and communities throughout Pierce County each summer. Since 1985, a total of 2,119 have been painted. In 2013, more than 500 volunteers helped to paint 37 houses!

Crews of Local 117 members and staff have painted 4 houses through the program.

This is a great way Teamsters can give back to the community.  It's a lot of fun, extremely rewarding, and it will provide you with an opportunity to get to know other members of the Local. 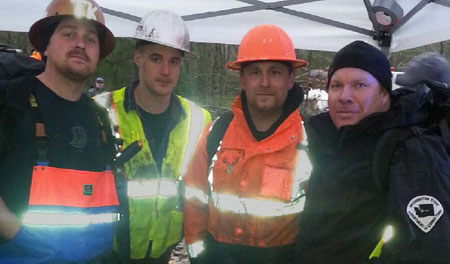 The new issue of Teamster Talk, the newsletter for members of Teamsters 117, is now available.

In this issue of Teamster Talk, you'll find articles on:

The newsletter is available in PDF format.  For print copies, talk to your Business Rep.

King County Teamsters - Today is the last day to do your civic duty and VOTE!  That's right, there's an election going on, about a critical issue for Teamsters - transportation.  If you haven't already, please mark your ballot YES for Proposition 1 to improve our transportation system by saving Metro and fixing roads.

Proposition 1 will decide the fate of our transportation future in King County for years to come, whether you drive a car or take the bus. A bipartisan, unanimous County Council voted to place this issue on the ballot, and it’s being supported by business, labor, non-profit organizations as well as both Republican and Democrat elected officials.  And it will support additional Teamster jobs.

Proposition 1 proposes a $60 annual car tab fee and a one-tenth-of-a-cent increase in the sales tax.  60% of the revenue generated by the measure would be spent on transit to prevent massive cuts to Metro, while 40% would go to maintain and repair our roads throughout the county, enabling cities and the county to:

These funds will go to every city and unincorporated area in the county.  For more information on how this would affect you and your city, please click here. 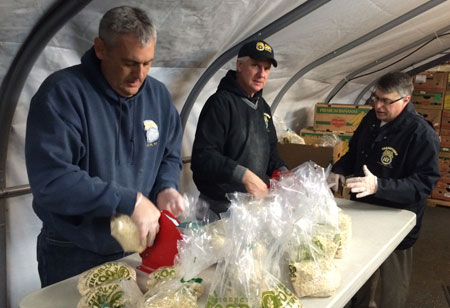 Your Union is about bringing people together and creating a strong unified voice for working families.  Teamsters 117 is also committed to building stronger communities.  In that spirit, a group of 14 Teamsters volunteered for several hours on April 16 as a part of the Emergency Food Network's (EFN) Volunteer Repack Project.

EFN is the primary food distributor to more than 60 emergency food sites in Pierce County. To get this food distributed to the individuals and families in need, EFN enlists volunteers to help repackaging fresh, frozen, and dry bulk foods into smaller, family-sized portions.

If you would like to volunteer for future EFN efforts to help feed families in need, give us a call at 206-441-4860.  Through May 12, Teamsters 117 is also sponsoring a Peanut Butter Drive to help feed hungry kids in Pierce County.

If you would like to participate or for more information, talk to your Shop Steward or Business Rep.

You can help feed hungry kids in Pierce County by bringing a peanut butter donation to your Union Hall or giving it to your Business Rep!

The backpack program is an initiative that allows kids who may not have access to food over the weekend to prepare healthy meals for themselves.

Get your donations in by May 12!  Thank you for helping to fight hunger!

Scholarships for Teamster kids - Available from the Retiree Club

The Teamsters Retiree Club is now accepting scholarships applications for 2014. The deadline for applications is July 3, 2014.

The 2014 Teamsters Retiree Club scholarship application can be viewed here.

Teamsters Retiree Club scholarships are awarded to the selected winners for study at any accredited College, Univesity or Vocational/Technical Schools.