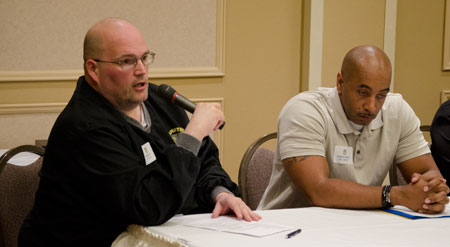 The battle is won, but the war has just started

In all 3099 members (55.64%) voted on the contract proposal.  The numbers showed that 3053 (98.52%) voted to reject the states offer, while 46 (1.48%) accepted it.  It was an overwhelming rejection of what our bargaining committee deemed as an unfair and unequitable contract when they unanimously recommended a “NO” vote.

This is just the beginning of the fight.

Now our contract goes to interest arbitration.  Over the next couple of weeks, the Teamsters 117 legal team will go before the arbitrator – Howell Lankford.  Witnesses will be called, facts will be presented and our case will be made.  Once he has heard all of the information, from both sides, he will make his decision and send it to the legislature for funding in the 2015-17 budget.  This is when the fight really starts.

We need ALL of our members to again “SHOW UP.”  Call and e-mail your legislators and the governor daily.  Have your friends and family do this as well.  They need to hear from us every day that the arbitrator’s award (whatever it is), needs to be included in the state’s budget.  It takes 5 minutes.  There’s no excuse to not do it.  It’s your family’s financial stability and future on the line.  Now is the time to take the momentum of this vote to the next level.

Who will stand with me???