Hope is defined as a feeling of expectation and desire for a certain thing to happen. With this said, this word is often used without understanding the emphasis and importance it deserves.

In November, I truly experienced a life-changing event that not only taught me its true meaning but taught me new things about myself. I was blessed with the opportunity to join the International Brotherhood of Teamsters in organizing the Las Vegas Clark County School District support staff under the Teamsters union.

This attempt has been made over a ten-year process which seemed an unachievable feat primarily due to an unfair election rule that required a super majority in order for the election win to be recognized. Simply put, fifty percent plus one of all eligible voters must vote for the Teamsters.

This rule is unfair because, despite the importance of high voter turnout, the reality is that it is impossible to obtain 100 percent. Therefore, under the super majority rule, all those members who did not vote were counted as no votes. After two elections, the Employee Management Relations Board ruled that super majority was unfair and awarded the opportunity of simple majority which required 50 percent plus one of eligible voters that actually voted.

Local 117 Stands with Those Who Serve 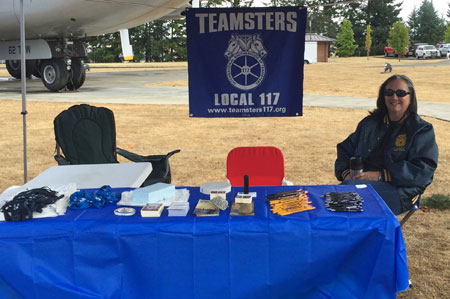 Sunday, August 30 was a windy, rainy day, but the faithful turned out for the fifth annual Stand With Those Who Serve event.

If you're unfamiliar, Stand With Those Who Serve is a "group dedicated to honoring the Law Enforcement and First-Responder communities and their families."  Every year the group sponsors an event for families to come together and share the reasons these brave men and women do their jobs.

Your Local Union is proud to participate in the event.

The following article was submitted by Adam Westerbur, a Shop Steward who works at the Washington State Penitentiary in Walla Walla:

MY EXPERIENCE AT UNITY

Teamsters is not just a Union, it is a family of people who believe in fighting for their rights, living wages, and fair benefits.

This family convened for the 2015 Teamsters Unity conference in Las Vegas and it was a privilege to attend as a member of Local 117.

I went to the Unity conference really not knowing what to expect. I have never been to Las Vegas, and I had never been to a Teamsters Conference - What a life changing experience!

DOC member changes his view on the union 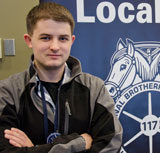 My name is Nicholas Cannady, and I am 22 years old. I have worked as a Correctional Officer at Clallam Bay Correctional Center for 2 years.

When I first started with DOC I was not a big fan of the union. I had the common misconception that the union didn’t do anything except take our union dues.

Well, back in January, one of the shop stewards kept talking about the lobby day and how it would help us get a raise, so I figured why not and decided to go.

Letters to the Editor: Fund our Corrections Contract!

Local 117 members are speaking out in newspapers across the state about the need to fund the DOC contract.

Local 117 Shop Steward Joschue Reyes has published two letters in local newspapers urging lawmakers to fund our DOC contract.  In the first letter, which appears in the Columbian, Reyes writes:

Despite becoming targets of assault, attempted murder, murder, contamination with blood and bodily fluids, and the physical, emotional, and psychological impacts these events create, we Department of Corrections state employees must assume multiple roles while maintaining a professional attitude. We are the security, the listeners, the counselors, the problem solvers, and conflict resolvers.

Recently I attended the Next Up summit in Chicago, Illinois organized by the AFL-CIO. What I saw there was both uplifting and thought-provoking.

For one, right to work (for less) and its effect on other States has had created challenges for our brothers and sisters around the country.

However, what is more powerful is the work being done by emerging leaders in the labor movement.

My Career as A Correctional Officer - By Sgt. Gregory Judd

Why would anyone want to be a Correctional Employee?  I’ve asked myself this question repeatedly over the past twenty years, unfortunately it only leads me to more questions.

This career is one of terrific peaks and valleys.  There are terror-level highs with split-second life and death decisions, complete with adrenaline rushes and the plethora of physical and emotional symptoms that come with it.  Then there are the valleys with hours of boredom and the monotony that come with such a structured routine.

We don’t go to the Starbucks kiosk at coffee break or chat around the water cooler, we don’t have that luxury. Most of our so-called breaks are on the very post we work, in the presence of the convicted felons we monitor, supervise, protect and serve.

WHEN WE FIGHT….WE WIN! This is the Teamster slogan which echoed through the halls of our Lobby Day rally point in Olympia, Washington.

With a room full of over 200 Department of Corrections members, Teamsters 117 personnel, and their families, January 27 became an important day with one specific goal. This goal mirrored itself in the minds of all present and those unable to physically be present but who sent their best wishes.

Our goal was to show the legislature that we are affected by the decisions they make and that we will stand up and have our voices heard.  We wanted those with the ability to create change to see the true faces of corrections.

Corrections should not be viewed as a bill, a contract needing ratification, or words on a piece of paper, but rather it should be viewed for exactly what it is.

Corrections is made up of the men and women who together keep our public safe and who operate 24 hours a day, 7 days a week without the ability to hang the CLOSED sign on the window.

Corrections is made up of people who must wear different masks and facilitate different roles.  Correctional employees do not have the luxury of a guaranteed return home after a long day of work but must operate with a heightened sense of awareness to deal with situations that are both dangerous and unpredictable.

Therefore we ask that our contract be funded so that we are compensated for the job we do. 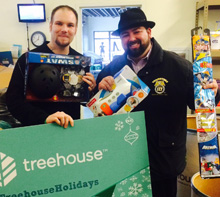 This last holiday season, instead of collecting toys in our shops as we have in the past, we asked members to bring toys to the holiday membership meeting to donate for our annual Teamster Toy Drive.

Members responded in a big way, donating a huge number of toys, gift cards, and even some cash.

“We were overwhelmed with joy on the response," said Marcus Williams, Local 117 Business Representative.

Thanks to the generosity of our members, 21 families received toys, providing 52 children with a little more to enjoy over the holidays!