Local 117 Shop Stewards - the Backbone of our Union

It was a show of unity and force this weekend as hundreds of our rank-and-file leaders assembled for our annual Shop Steward and Appreciation Day.

It was a show of unity and force this weekend as hundreds of our rank-and-file leaders assembled for our annual Shop Steward Seminar and Appreciation Day.

The event kicked off with a gathering of our DOC Stewards on Friday afternoon here at the Union hall. Topics for discussion included upcoming DOC contract negotiations, the passage of our assault benefits bill, and our newly-won interest arbitration rights.

The main event was on Saturday, when over 300 Stewards met at the Washington State Convention Center in downtown Seattle to build union strength and solidarity and for training and strategy sessions.

Secretary-Treasurer John Scearcy welcomed members and laid out the State of our Union - the second largest Teamsters Local in the country.  He discussed member engagement, financial stability, political action, staffing, and our "members first" membership model.

"My biggest priority is to make sure that we are always putting members first," Scearcy said. "This is your union. Members built it and members will sustain it and continue to make us strong. Thank you for being an essential part of that." 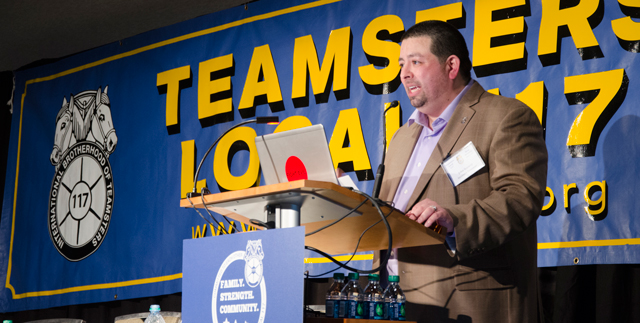 Secretary-Treasurer Scearcy was followed by the day's keynote speaker, Washington State Attorney General Bob Ferguson, who addressed the many steps his office has taken in protecting workers' rights.

Thank you @AGOWA Attorney General Bob Ferguson for standing up for working families! #Teamsters #1u pic.twitter.com/zDSgsvppDf

Next up was our very own Spencer Thal, Local 117's outstanding General Counsel, who gave an illuminating talk on various aspects of leave laws and regulations.

Throughout the day, we collected hundreds of signatures in support of a statewide citizens' initiative (I-1433), which, if passed by voters this November, will boost the minimum wage and provide all Washingtonians the ability to earn sick and safe leave.

We also signed up shop captains to collect peanut butter donations to benefit hungry families through the Emergency Food Network and solicited members interested in starting a new Climate Caucus at the Local.

After some lively discussions in our breakout sessions, the event concluded with lunch and a presentation on our long, proud history as Teamsters by Karin Jones, a historian from the IBT's Training and Development division.

Thank you to the Stewards who were able to attend and to ALL of our Local 117 Shop Stewards for the incredible work you do every day to serve our union and make us strong.

You are the backbone of this union!