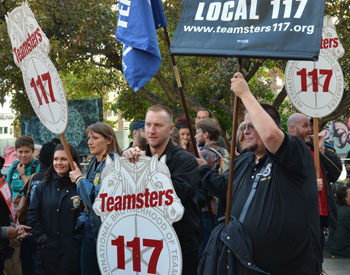 The protest started at Seattle City Hall and ended with a rally in Occidental Park in Pioneer Square.

Naomi Klein, the author of This Changes Everything: Capitalism vs. the Climate, was the keynote speaker at the event.

Organizers of the march emphasized a growing body of evidence to suggest that workers, communities of color, and lower income communities are most affected by climate change.

Local 117 joined a coalition of labor unions, community groups, environmental groups, and faith-based groups that participated in the event.

"The four pillars of survival are air, water, food  and shelter," said Peter Miller, a Local 117 Shop Steward at the Woodland Park Zoo. "Unions need work to protect and maintain the very pillars of our survival."