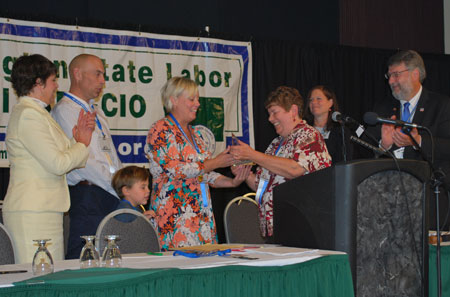 Brenda Wiest, your Union's Legislative Affairs Coordinator, was honored at the Washington State Labor Council (WSLC) convention in Wenatchee on Tuesday with the 2014 Elsie Schrader Award for the advancement of women in leadership roles and activism on behalf of women within the labor movement.

Brenda is one of the driving forces behind Tacoma’s Paid Sick Days campaign.  She serves on the Emergency Food Network Board of Directors, and on the Executive Board of the Pierce County Central Labor Council, where she has been effective at recruiting other union members to get involved.

Brenda also sits on the Washington State Food System Roundtable and she helped found the Farm to Family Coalition, a network of community and labor groups dedicated to food worker justice across the food supply chain.

In other convention news, Local 117 delegates, including Sgt. Michael Boe of the Monroe Correctional Complex, introduced a resolution today in support of State correctional employees, who are members of Teamsters 117.  The resolution passed with the full support of the delegates. You can read the resolution in its entirety below:

WHEREAS, approximately 6,000 corrections staff who work in the Washington state prison system are members of Teamsters Local 117; and

WHEREAS, these workers go to work every day with offenders who pose a significant staff safety risk; and

WHEREAS, no worker should have to go to work every day in fear for their safety or their lives; and

WHEREAS, the average offender in prisons is increasingly more likely to be high violent and more prone to assaulting correctional staff; and

WHEREAS, the state has closed three institutions since 2010 and eliminated some $240 million from the state corrections budget; and

WHEREAS, the Washington Management Service recently rebanded and gave all management raises while no correctional staff have received raises since 2008, and the State’s own salary survey suggests that most correctional employees are compensated at rates of more than 20% less as compared with their counterparts who work outside of the prisons; now therefore, be it

RESOLVED, that the Washington State Labor Council, AFL-CIO, and their affiliates oppose any cuts to funding for the Department of Corrections and support wage increases for DOC employees commensurate with the danger of their jobs.