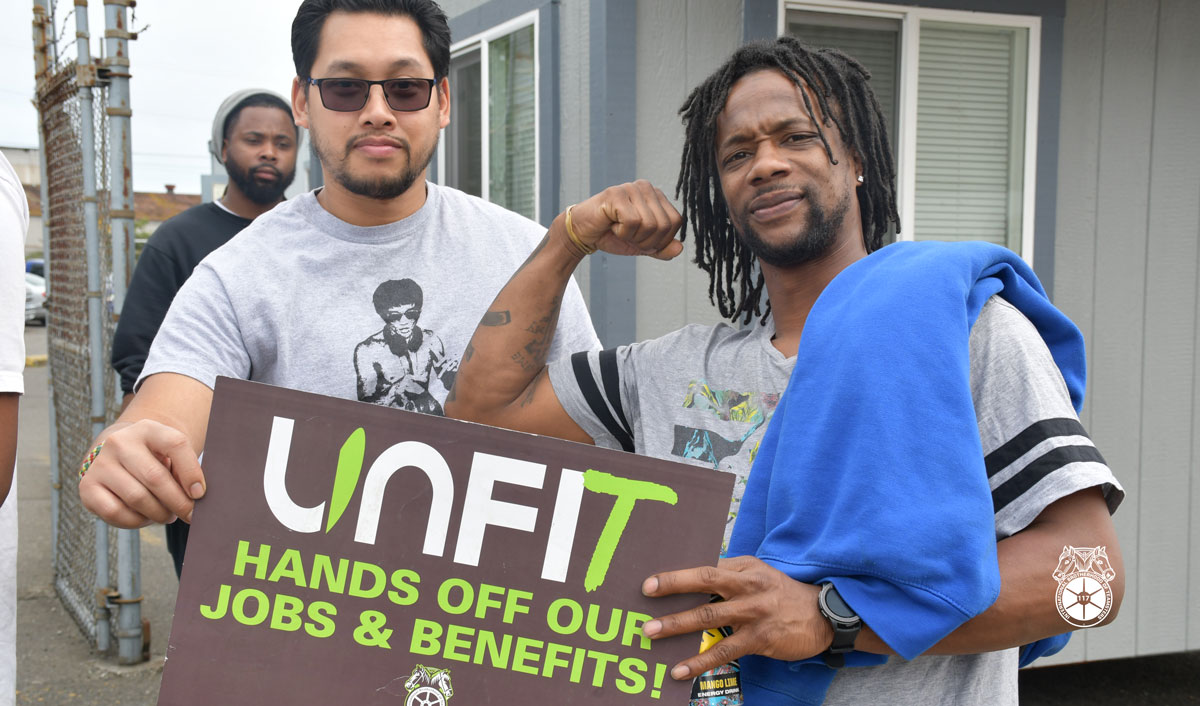 This page is set up to provide updates to Teamsters 117 members who worked at UNFI's warehouse in Tacoma and were unlawfully laid off by the company. Our Union is defending an Arbitration Award that UNFI is challenging in federal court.

Our goal is to fight the Company in court and uphold the Arbitrator's Award that allowed members to transfer to Centralia with the same wages and benefits that they had in Tacoma. When there are developments in the case or other news that impacts Teamster families, we will post it here.

To receive updates via text message, text "Teamsters FUNFI" to 313131. Please understand that the litigation process is a lengthy one and there may be several weeks between updates. If you have questions, please post them in the comments below understanding that our legal team is busy and will answer them when their schedule allows.

June 18, 2020
On Saturday, June 20 at 10:30am, we will have an online update meeting from our outside legal counsel on the arbitration. Our Union's attorneys in the case will be available to answer your questions. To attend the meeting, you must register in advance. Please click on the link to register: UNFI Arbitration Discussion – Saturday, June 20 @ 10:30am

May 26, 2020
On Thursday, May 21, our Union's legal team, together with outside legal counsel, had a conference call with the General Counsel of the National Labor Relations Board and the attorney for the NLRB's Division of Advice. On that call, our legal team responded to a series of questions related to the Arbitration Award. You can read the questions and our answers to issues raised on the call in a document prepared by our legal team here.

We will be setting up a meeting on Zoom, an online video conferencing platform, for Union members who have been impacted by the case. In that meeting, you will have the opportunity to discuss issues related to the case with our Union's legal team. As soon as that meeting is scheduled, we will let you know.

May 16, 2020
On Thursday, May 14, our Union submitted a motion for Judgment on the Pleadings and our Proposed Order, asking the federal judge to uphold our arbitration award. This coming Thursday, May 21, our Union's legal team, supported by outside legal counsel, has a conference call with the General Counsel of the National Labor Relations Board and the attorney for the NLRB's Division of Advice. On that call, we will be discussing UNFI's Unfair Labor Practice charges claiming that the award violated the National Labor Relations Act. We will updated you after our conversation with the NLRB next week.

April 29, 2020
Background: UNFI filed two actions to avoid complying with Arbitrator Duffy’s arbitration award, which determined that Tacoma employees had transfer rights and the right to continue working for the same wages and benefits at the Centralia facility. It filed Unfair Labor Practice charges with the NLRB claiming that the arbitration award violated the National Labor Relations Act. It also filed a federal lawsuit (Case Number: 2:19-cv-01736-RAJ) seeking to overturn the arbitration award.

Region 19 of the National Labor Relations Board has sent UNFI's unfair labor practice charges to the Division of Advice to decide whether to move forward with the case.

Meanwhile, UNFI asked the federal judge in the federal case to "stay" (e.g. pause) the federal action while the NLRB case played out. We opposed that motion and are waiting for the judge to rule.

In the federal court case, we are preparing a motion for summary judgment, asking the federal judge to "confirm" the arbitration award. We plan to have our motion fully prepared and submitted by May 14, 2020. We will update this thread once that motion is filed.

April 2, 2020
In an effort to keep you all updated on the processing of the litigation, we contacted the court for a status update today. The only new information is that the motion for stay that was filed on 1/24/2020 is in Judge Jones' queue. The court was not able to provide a time frame for a decision. As we have shared before, this is a slow legal process that is presumably further delayed by the staffing and priority case load in relation to the COVID-19 crisis. Although this update does not include any major development, we have been asked by the membership and we have committed to provide regular updates no matter how big or small.

March 13, 2020
Due to the coronavirus outbreak, the meeting at our Union Hall in Tukwila on March 21 has been cancelled until further notice. Please stay healthy and safe!

March 5, 2020
As you know, UNFI filed actions in both Federal Court and at the National Labor Relations Board (NLRB) against the Union to challenge Arbitrator’s Duffy’s award.  In the Federal Court action, UNFI filed a motion to stay (put on hold) those proceedings until the NLRB ruled on their charges. We suspect that the Company's motives for filing the motion to stay are to continue to block your rights under the Award and to slow down the process as much as possible. The judge has not yet ruled on that motion. As soon as we hear from the judge, we will let you know.

At the regional NLRB office (region 19), our Union’s outside legal team filed a supplemental position statement a few weeks ago. Our statement provides a good overview of our main arguments in the case and request that the Board dismiss UNFI's charges. To inform yourself, please take some time to review this document. Since then, the regional office has been unable to make a determination about UNFI’s charges (likely for political reasons) and has submitted the charges to the NLRB General Counsel (a Trump appointee) for “advice”. We suspect the General Counsel's "advice" will be to push these charges to hearing. We are preparing for this outcome. Stay tuned for more information.

January 13, 2020
As many of you know, our Union filed and won and Arbitration Award related to the transfer of work to Centralia. Unfortunately, UNFI has refused honor the Arbitration decision and has instead filed appeals with the National Labor Relations Board (NLRB) and in Federal Court. The following updates are related to the litigation over UNFI’s appeal:

Although litigation is slow-moving, we are committed to keeping you updated with posts and text alerts as we progress through this process. To receive a text that an update has been posted, please text “Teamsters FUNFI” to 313131. If you have questions, please post them in the comments below understanding that our legal team is busy and will answer them when their schedule allows.

January 3, 2020
As many of you know, our Union filed numerous Unfair Labor Practice charges (ULP’s) with the National Labor Relations Board over the last year alleging that UNFI engaged in interference, disparaging communications, surveillance, unilateral changes and more. Although these charges are unrelated to the Arbitration and the ongoing litigation over the award (appeal), we feel it is important to keep you updated on the progress:

Union’s Unfair Labor Practice charges against UNFI:
The hearing on these charges was scheduled for Tuesday, January 7, 2020. On January 2, 2020, the Labor Board reached a settlement with UNFI, requiring the Company to send a notice posting to current and former Local 117 and 313 members setting forth UNFI’s legal obligations to its employees under the National Labor relations Act.

As mentioned above, UNFI is mandated to mail you a letter setting forth UNFI’s legal obligations to its employees under the National Labor Relations Act. We expect that letter to be mailed out within the next week or two. This letter will not require any further action from you. Although this may seem insignificant, it marks another Teamster win against this employer that couldn’t be possible without the involvement and testimony of many of you.

We have asked our legal team to draft an update related to the litigation over the Arbitration award and the appeal process. We intend on providing that update soon. 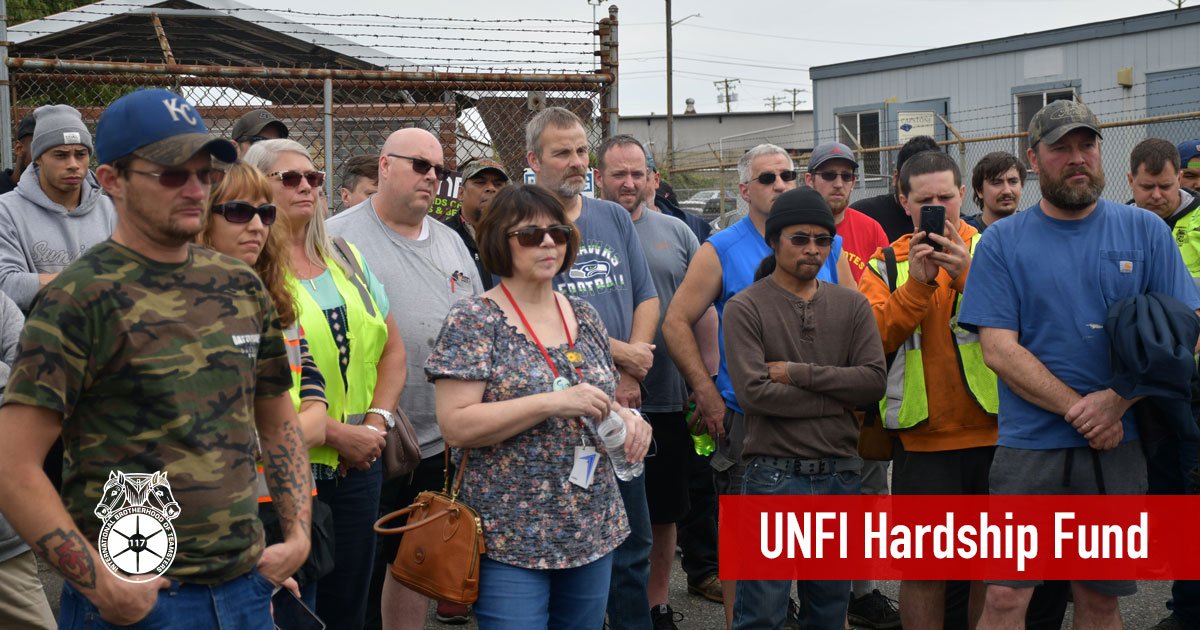 October 7, 2019
Arbitrator Joseph Duffy rules unequivocally for the Union stating that members of Teamsters 117 shall be allowed to transfer to Centralia under the same terms and conditions that they have in Tacoma. View the Arbitration Award here.