Arbitrator rules in favor of Teamsters in UNFI relocation case

Teamsters at UNFI’s warehouse in Tacoma celebrated yesterday after an arbitrator ruled that union members shall be allowed to transfer to Centralia under the same contractual terms and conditions that they have in Tacoma. 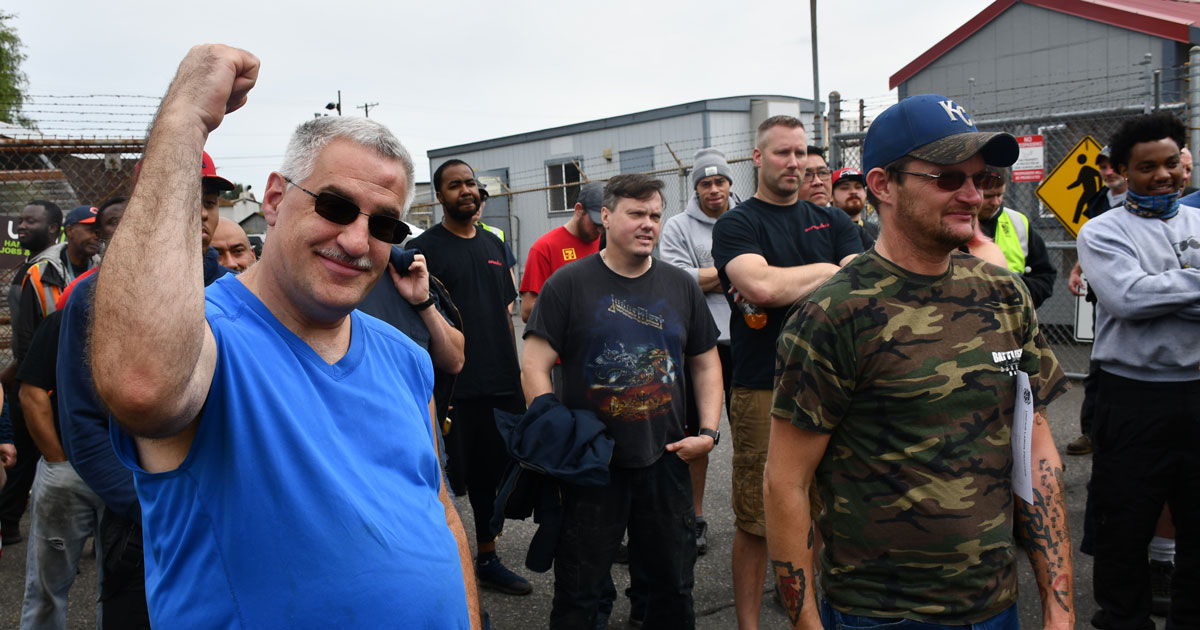 UNFI Teamsters in Tacoma protest the company's failure to make timely health and welfare and retirement payments to the Trust.

Teamsters at UNFI’s warehouse in Tacoma celebrated yesterday after an arbitrator ruled that union members shall be allowed to transfer to Centralia under the same terms and conditions that they have in Tacoma. The arbitrator also awarded transfer rights and back pay to any employees who are facing layoffs, which are scheduled to start at the facility later this week.

“I’m prouder to be a Teamster now than I’ve ever been in 30 years,” said Greg Wiest, a shop steward and forklift driver at the facility. “This is not only big for us, but it’s big for the entire labor movement. The talk in the warehouse since the decision is that a lot of us will be going down to Centralia. We’re pretty excited – morale’s way up today. Now we know that we have a job.”

"I’m prouder to be a Teamster now than I’ve ever been in 30 years."

Earlier in the year, UNFI announced that it would be shutting down the Tacoma warehouse and moving operations to a new facility in Centralia. The union filed a grievance after UNFI refused to honor clear contract language that laid out the terms and conditions of the move. The contract states: “…all employees working under the terms of this agreement at the old facility shall be afforded the opportunity to work at the new facility under the same terms and conditions and without any loss of seniority or other contractual rights or benefits.”

Arbitrator Joseph Duffy ruled unequivocally for the union stating: “The Employer violated Section 1.01.2 of the Agreement when it refused to apply the terms of the contract…”

“This is an extraordinary victory not just for Teamsters at UNFI but for working people across this country,” said John Scearcy, Secretary-Treasurer of Teamsters 117. “The Arbitrator upheld strong language in our contract that protects the rights of our members. Now hundreds of working people will have the opportunity to retain good, family-wage jobs with the same health and welfare protections and retirement security that our Tacoma contract provides. We hope UNFI will do the right thing and move swiftly to honor the arbitrator’s decision.”

Leading up to the decision, union members wore solidarity buttons that read, ‘Article 1 – Let’s get it done!, referencing the article that protects their rights in the event of a transfer. “The buttons reminded everybody what we were fighting for,” Wiest said. “They showed the new members who came in that we are united.”

In May 2019, union members rallied outside the Tacoma warehouse during their lunchbreak demanding that the company honor their contract. In July, UNFI employees in Tacoma walked out of the facility after the company was delinquent on health care and retirement payments that the company had agreed to in negotiations.

According to union members facing layoffs at the facility, the company has not reported income for Tacoma employees since December 2018. Many are concerned that this will result in a delay or a reduced unemployment benefit.

UNFI has a history of labor unrest with the Teamsters. In December 2012, members of Teamsters Local 117 employed at UNFI’s distribution center in Auburn entered into a 9-week strike over a number of alleged violations of federal labor law.