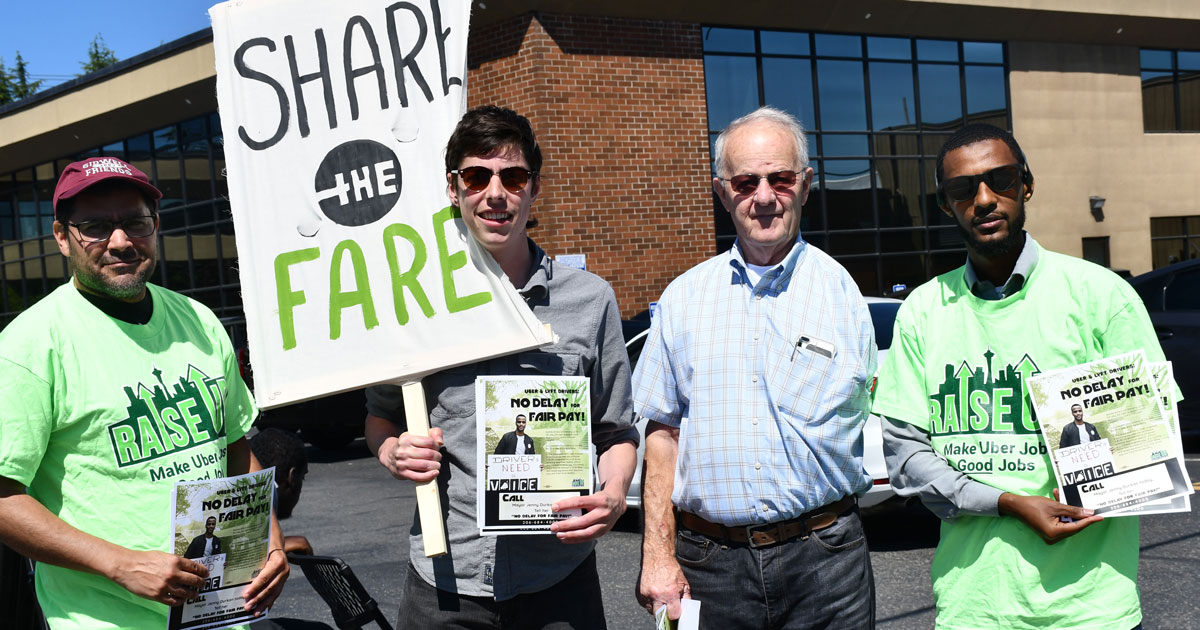 Today, Uber drivers leafleted outside of Uber’s Seattle office, and at more than a dozen other driver gathering spots, to generate calls to Seattle Mayor Jenny Durkan calling on her office to immediately introduce legislation to raise driver pay and establish labor protections.

The leafleting actions come on the heels of Uber releasing a proposal to impose a $3.80 congestion toll on all Seattle commuters.  Drivers say the company’s $3.80 congestion toll plan is nothing more than an attempt to cause delay and avoid regulations that would raise driver pay and fund benefits.

"Instead of focusing on congestion tolls, Uber needs to do right by their drivers first..."

“Instead of focusing on congestion tolls, Uber needs to do right by their drivers first,” said Peter Kuel, an Uber and Lyft driver for more than 5 years and a leadership council member of the App-Based Drivers Association.  “Uber and Lyft should do today what every other business in Seattle already does – ensure drivers earn benefits like paid sick days and are never paid less than minimum wage after expenses.”

Across the country, drivers have been taking action for fair pay, the right to appeal unjust terminations, and a voice with benefits.

In May, Seattle drivers delivered a report to City Hall exposing how Uber and Lyft are pocketing an increasingly greater share of rider payment in the Seattle market while drivers are earning less.

The study, Uber/Lyft take more, pay drivers less, is based on an analysis of company financial reports combined with trip-level data collected by drivers in Seattle. When Uber and Lyft first came to Seattle, drivers were paid 80 percent of what riders were charged. Today, on the median trip in Seattle, drivers received just 69 percent, according to the report published by the App-Based Drivers Association.