Posted by Paul Zilly 746sc on October 09, 2015
Join us on Sat. as we get out the vote for @Teamsters candidate Sgt. Michael Boe running for Lake Stevens City Council. 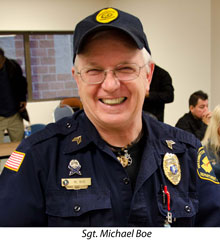 Talk about a true blue Teamster.

Sgt. Michael Boe, Shop Steward at the Monroe Correctional Complex, is as dedicated and loyal as they come.

He's been down to Olympia on countless occasions to lobby on behalf of working families.  He's testified in committee, spoken out to the press, and canvassed for Teamster-endorsed candidates.

Now he's running a campaign of his own, and he needs our support.

Sgt. Boe is vying for a seat on the Lake Stevens City Council. In 2013, he narrowly lost his election for city council by just a handful of votes.

Sgt. Boe is a 19-year DOC veteran and a U.S. Air Force Retired Master Sergeant, who served actively for 25 years. He's a real leader at work and in his community.

Tomorrow Teamster members will be out in the community getting the vote out in support of Michael. If you can join us, we'll be meeting at the Starbucks at the Frontier Village Shopping Center near Safeway in Lake Stevens at 9 a.m.

RSVP for the event here!