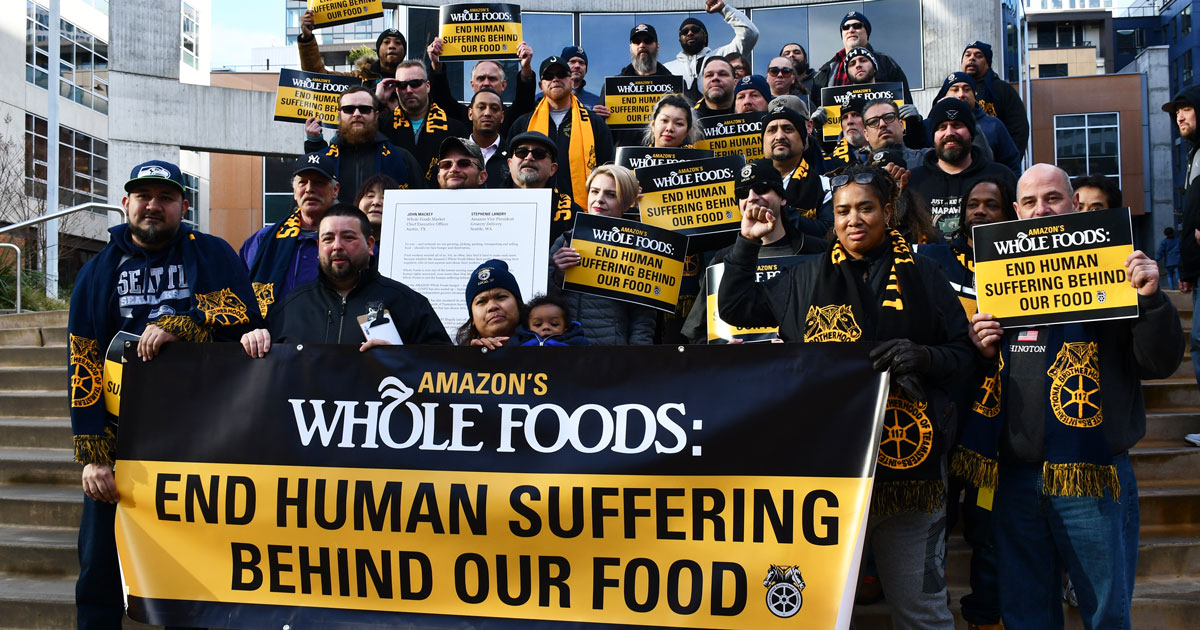 Whole Foods is one of the lowest-scoring supermarket chains on Oxfam’s human rights scorecard, even worse than Walmart.

On the same day, in Seattle, laid-off grocery workers, Teamsters Local 117 representatives and consumer allies visited Amazon headquarters to demand that Amazon-owned Whole Foods weigh in on its largest supplier, UNFI to stop labor abuses there.

Teamster officials in Austin, participating in the event with Oxfam and FLOC, tried to deliver a letter to John Mackey, CEO of Whole Foods.

Seattle protestors sought to meet with Stephenie Landry, VP of Grocery Delivery for Amazon and deliver the same letter, demanding justice. Click to read the letter, and see photos and video from Seattle.

“Hundreds of families are hurting today, because Whole Foods' partner UNFI is not honoring contract terms that we negotiated and they agreed to, that's unacceptable and we won't stand for it," said John Scearcy, Secretary-Treasurer of Teamsters Local Union No. 117. “Amazon has the ability and the responsibility to demand Whole Foods and UNFI stop abusing workers and communities across its entire supply chain, and honor their commitments to us all.”

"We demand Whole Foods and UNFI stop abusing workers and communities across its supply chain."

Right before the holidays, UNFI illegally laid off over 200 workers from its Tacoma, Wash., distribution center. UNFI is refusing to honor an arbitrator’s award that upholds the workers’ contract and protects their wages and benefits.

“The loss of money, medical benefits and retirement that we have become accustomed to has really made life difficult. I have had my garbage service canceled due to inability to pay. My phone has been shut off for a couple of weeks. How am I supposed to find employment without a phone? What if there was a problem with my daughter at school? I have also fallen a month behind in rent,” said Jason Black, one of the laid off Tacoma, food distribution workers. “Other workers have been hit with evictions, had utilities shut off and scrounged for change to make sure their families are fed. Food, shelter, clothing and good health for our families are the main priorities now and covering these expenses is hard and is only going to get harder because of UNFI’s greed.”

Teamsters urged Amazon’s Whole Foods grocery executives Mackey and Landry to call on UNFI CEO Steven Spinner to comply with the arbitrator’s decision and stop breaking the law – as a first step toward demonstrating their combined company’s commitment to a truly sustainable food supply.

Whole Foods Market has a strategic supply chain agreement with UNFI, which runs more than 50 grocery warehouses, and is an essential partner to Amazon’s premier grocery channels: Whole Foods and Amazon Fresh.

The protestors also called on Amazon’s Whole Foods to ensure that all its suppliers respect workers’ rights and safety.

Teamsters represent over 4,000 members at UNFI across much of the U.S. UNFI has recently escalated its attacks on its local labor unions, leading to extensive unrest across its grocery distribution network, including a two-week strike in the Midwest in late December 2019.