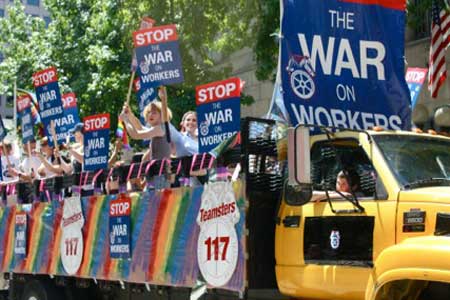 For someone who has never been to a Pride Parade, I felt somewhat naive and embarrassed when I asked if the parade was family friendly.  “Yes, and people do bring their families,” Dustin said.  “Stories you may have heard about people acting a little crazy - that stuff usually happens much later in the day, at parties that the Teamsters are not participating in.  The parade itself is only from 1 P.M. to about 2 or 2:30 P.M., and every year there are thousands of kids along the parade route.  Many Gay and Lesbian families have kids too. A number of businesses also participate, including Safeway, Boeing, Fred Meyer, etc., and they usually do giveaways of some kind and pass out candy to the kids.”

So how exactly does this all go down?  “We’ll meet on 4th Avenue, hang out, assemble, and then walk down to the Seattle Center, it’s that simple,” Dustin said.  “We’ll have the big Teamster semi-truck, a DJ, and we’ll still have a booth as well.”  There will also be other bands present. The 2013 event featured more than 100 performers on five stages.

“Honestly, the hardest part of all of this is recruiting people to march.  Because this is such an important issue for the Teamsters, we’d like to have a big contingent, maybe 50 people in our group,” Dustin said.

The parade, which began 40 years ago in 1974, will be lead by George Takei of Star Trek fame, and is expected to attract over 50,000 people. “All members, gay or straight, are invited to march with us,” Dustin said. “In fact, many of those who watch the parade are straight, and they come to the parade in support, as strong allies.” To illustrate this point, Dustin points out that he also participated in events for the Latino Caucus last year, even though he is not Latino. “We should all be supportive of each other. Sure, people get nervous about participating, but that nervousness is no different than the nervousness of trying something like Lobby Day or Phone Banking, or even standing up to an employer.  Sometimes you just have to do it.”

Dustin participated for the first time last year. “I can promise that people will have fun.”

You can also RSVP for the event here.

This article was written by Josh Putnam, a Shop Steward at Fred Meyer.  Josh is a member of your Union's communications committee.