The power of Teamster correctional employees was on full display in Olympia today. Over 150 members and their families, along with Teamster staff and members from other industries, met with dozens of legislators as a part of our DOC Lobby Day. 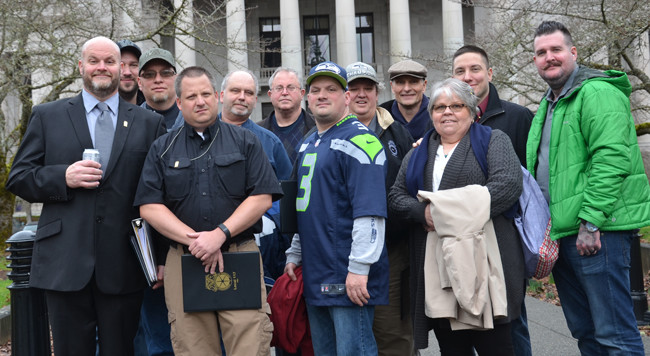 The power of Teamster correctional employees was on full display in Olympia today.

Over 150 members and their families, along with Teamster staff and members from other industries, met with dozens of legislators as a part of our DOC Lobby Day.

Members made the trip to the State Capitol from all corners of the State, as far as Spokane, the Tri-Cities, Walla Walla, Clallam Bay, Aberdeen, and Monroe.

“This gives us an opportunity to share our voice, and express our opinion on some of the issues that are affecting us. And one of those is extending assault benefits,” said Tyrell Baker, an officer at the Washington Corrections Center for Women.

Indeed, ensuring that Teamsters at DOC who are seriously injured in an assault have the benefits they need to continue to provide for their families was the day’s number one priority.

“It needs to happen because there are too many people who fall through the cracks,” said John Carpenter, an officer at the Stafford Creek Corrections Center in Aberdeen.

Currently, DOC staff who are assaulted on the job receive benefits for no longer than one year before the benefits are cut off by the state.

“In that one-year time frame, a lot of people are not fit or ready to come back to work,” Carpenter said. “Now their benefits have ended, and most of us have got kids and mortgages and car payments and everything else, and now it’s all gone.”

Our bill – HB2507 - would extend those benefits until the assaulted employee is able to return to work or is medically discharged.

Listen to one member - Patrick McPherson - describe his assault experience in a public radio interview with reporter Austin Jenkins.

At Lobby Day, members also had the opportunity to attend a House hearing on HB 2507. Two corrections staff - David Lynch and Joschue Reyes – provided powerful testimony in support of the bill.

“I received injuries to my neck, my shoulder, my arm, and my back and I lost a significant use of my left arm,” Lynch said, recounting a brutal assault that took place at the Coyote Ridge Corrections Center in 2012.

“Because of that assault, my life has changed dramatically. I have been unable to return to work. I have been in constant, unrelenting pain, and the assault benefits have long since expired… Please pass House Bill 2507. It won’t help me, but it will make a difference to future corrections officers, correctional staff and their families.”

Join Officer Lynch and other DOC Teamsters in calling for immediate passage of HB 2507 and its companion bill in the Senate – SB 6286. Call the Legislative Hotline at 1.800.562.6000 and tell your legislators to extend assault benefits for correctional employees.

No one who is assaulted at work while serving our communities should have their benefits cut off because they are physically unable to return to work.

You can learn more about our assault benefits bill as well as the rest of our Teamsters 117 legislative priorities here.

Thanks to all the @teamsters117 members who made our 2016 #DOCLobbyDay a success!