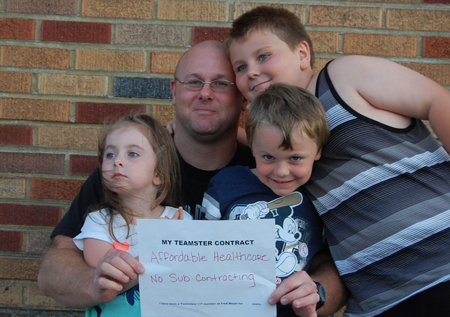 After three months at the bargaining table and five weeks working without a contract, Teamsters Local 117 warehouse workers, employed at the Fred Meyer distribution center in Puyallup, have voted overwhelmingly to ratify a new 3-year contract.

The contract vote took place at the Teamsters Union hall in Tacoma on Saturday, September 27.  The proposal was fully-recommended by the Union bargaining committee.

“This is a contract that Teamsters at Fred Meyer can be proud of,” said Tracey A. Thompson, Secretary-Treasurer of Teamsters Local 117.  “We were able to secure family wages, retirement security, and protections against subcontracting.  We were also able to maintain health care coverage that protects our members and their families.”

The workers and their allies participated in efforts to educate consumers and raise community awareness about their concerns that arose during the bargaining process.

“I want to thank our Teamster Brothers and Sisters and our many labor and community partners for their unwavering support,” Thompson said.

“Warehouse workers at Fred Meyer have shown incredible solidarity and resolve throughout this process.  Along with workers on the farms and in the stores, grocery warehouse workers play a vital role in keeping our food healthy and safe.  We need to thank them for the important work they do in helping to feed families across the Pacific Northwest.”