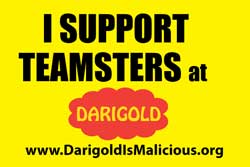 Across the country, working people are ramping up the fight to create and preserve good jobs.

After watching their wages stagnate or decline for decades now, workers are starting to turn up the heat on a small handful of corporate cronies who are trying to destroy the middle class.

In several cities, fast food workers are rising up and demanding a livable wage.  Locally, low-wage workers in the city of SeaTac have put forth an initiative that would raise the minimum wage to $15/hr and secure full-time work for thousands of workers at the airport.

If the initiative - Proposition 1 - passes this November, it would profoundly transform the lives of thousands of families in our region.  It would also boost the local economy and small businesses by putting more money in the pockets of workers.

Read more about the SeaTac Good Jobs Initiative at www.yesforseatac.org.

Meanwhile, Teamsters at Darigold are fighting back against an unjust employer that has broken the law by refusing to bargain in good faith.  On September 25, in an incredible show of solidarity, the workers unanimously rejected their employer's contract proposal 161-0, sending a powerful message to the company that it is not okay to try to intimidate workers.  You can support them by signing the online petition at www.DarigoldIsMalicious.org.

These are just a few examples of the way Teamsters and other workers are pushing back and demanding justice.  You can read about these fights and more in your Local Union's new issue of Teamster Talk.