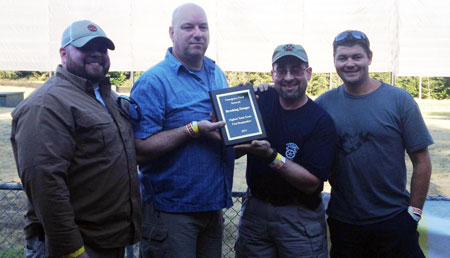 For the second year in a row, Teamsters Local 117 out-shot the competition to snare the first responders’ award at the annual Breaking Hunger fundraiser.

The trapshooting contest, held at the Gig Harbor Sportsmen’s Club on August 1, was organized to benefit Pierce County’s Emergency Food Network and thousands of hungry families throughout our region.

Your Local Union’s Executive Board agreed to sponsor the team at the $500 level. All proceeds from the event went to benefit the Emergency Food Network.  In all, the event raised over $10,000 to feed hungry families in Pierce County.

Thank you to the members from the Teamsters Law Enforcement & Corrections Division who participated in the tournament and congratulations on your first place finish!

The Pierce County emergency food system includes 67 food banks providing over 15 million meals annually to over a hundred thousand families in need.  Teamsters Local 117 is a generous supporter of EFN and has participated in a number of volunteer events to benefit the organization this year.