Teamster bus drivers at the Port of Seattle are banding together

You’ll see them on the wrists of bus drivers circling around Sea-Tac Airport – white bands bearing a message of unity and strength. 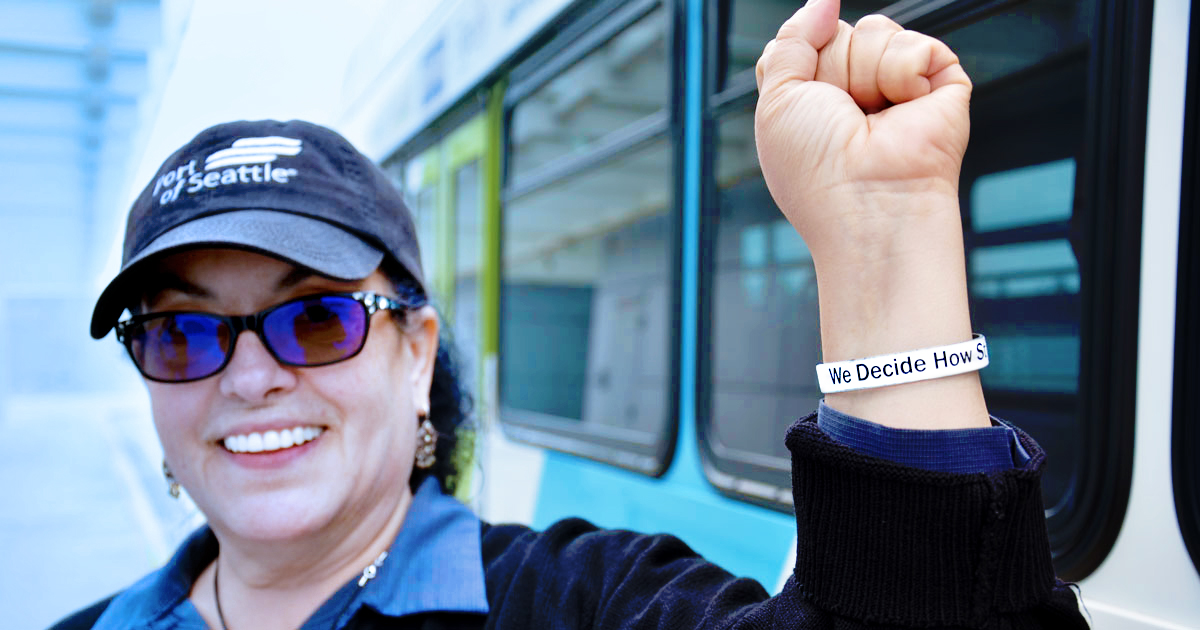 You’ll see them on the wrists of bus drivers circling around Sea-Tac Airport – white bands bearing a message of unity and strength. The bands read: We decide how strong our union will be. When drivers pass each other on their routes, they raise their fists as a show of union pride.

Local 117 member Tambra Fontes got the idea for the wristbands, together with shop steward Monica Petty. “We were trying to unify all of us drivers and get us to become one,” Tambra said.

Tambra hails from a strong union family. Her father worked for the postal service, where he was a shop steward for his union. Her husband, Josh Hoopes, is a Local 117 member at Animal Supply. “Getting this job was everything for me,” she said. “Being Teamsters is exactly what my dad wanted for me. It felt like our future was set – you couldn’t ask for anything more.”

"It felt like our future was set – you couldn’t ask for anything more."

Tambra and Monica have been teaming up to alert their co-workers about the potential impact of the Janus court case. They’ve talked about the importance of sticking with the union.

Their call for solidarity has been effective as nearly all Port of Seattle bus drivers have signed cards committing to the union. “When we stand together, our freedom, power and unity cannot be taken from us,” Monica says.

Getting people signed up on commitment cards was essential, but the two women also wanted a symbol that matched the message. “Being a driver, it’s kind of hard for all of us to connect,” Tambra said. “The wristbands are something that we can wear to let everybody know we’re all one.”

With contract negotiations coming up next year sustaining that unity will be key. The drivers have already shown that no court case or external group can weaken their voice on the job. Tambra and Monica have decided that they want to keep their union strong. And because of members like them, it is.