Ride hail drivers took their vehicles on a slow procession through Seattle neighborhoods today to call for better working conditions at Uber and Lyft. 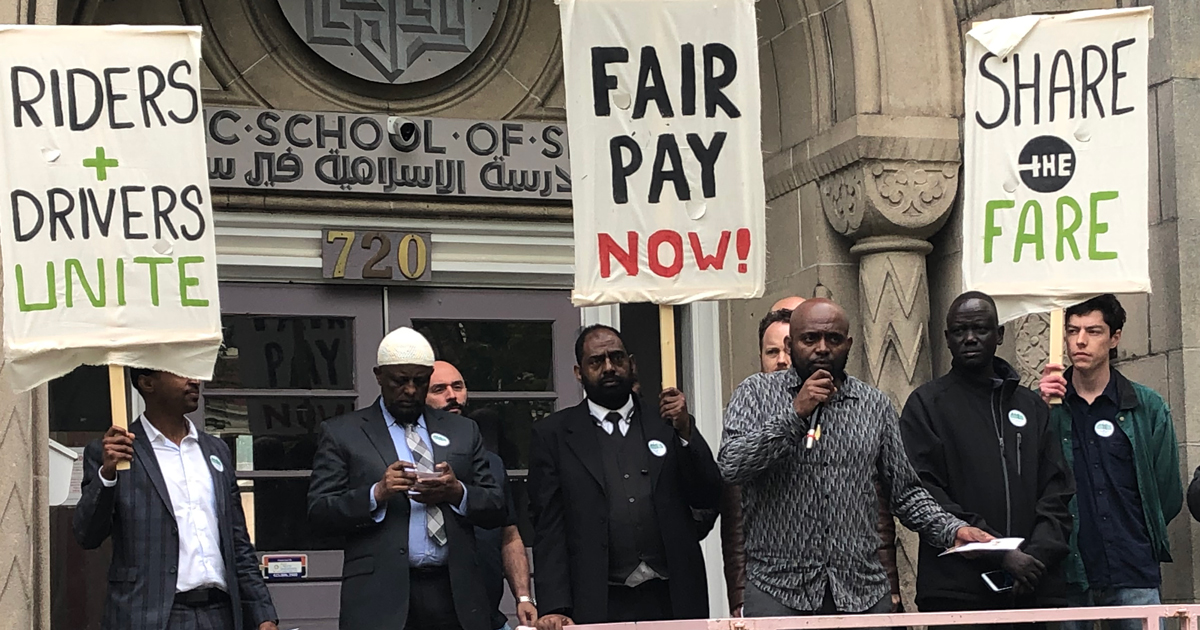 Uber and Lyft drivers speak out for fair pay and a voice before their caravan embarks for City Hall.

Ride hail drivers took their vehicles on a slow procession through Seattle neighborhoods today to call for better working conditions at Uber and Lyft. Drivers ended their caravan at Seattle City Hall where they delivered their demands to City officials for fair pay, a due process to appeal deactivations, and a voice.

“We are tired of seeing Uber and Lyft siphon off bigger and bigger percentages of what riders pay,” said Fasil Teka, an Uber driver of 7 years. “It’s time for the City to ensure that drivers have the same rights as all workers in Seattle.”

"It’s time for the City to ensure that drivers have the same rights as all workers in Seattle."

Embarking from the Masjid al-Taqwa mosque in Seattle’s Central District, drivers honked their horns and displayed signs on their vehicles that read, “Share the fare!” and “Uber and Lyft: Listen to your drivers!” The caravan wove through the heart of the city, from the Central District to Capitol Hill and downtown Seattle, neighborhoods with some of the greatest concentrations of ride hail customers.

“We are asking our customers to stand with us in our effort to win fair pay and a voice,” said Lyft driver, Mohamed Sharif. “When drivers are paid a living wage and can stand together to improve driver and passenger safety, our local economy and the entire community benefits.”

Along with a list of demands for better working conditions, drivers delivered a new report to City officials exposing how Uber and Lyft are pocketing an increasingly greater share of rider payment in the Seattle market while drivers are earning less.

The study, Uber/Lyft take more, pay drivers less, is based on an analysis of company financial reports combined with trip-level data collected by drivers in Seattle. When Uber and Lyft first came to Seattle, drivers were paid 80 percent of what riders were charged. Today, on the median trip in Seattle, drivers received just 69 percent, according to the report published by the App-Based Drivers Association.

The Driver Caravan follows a powerful Driver Speak Out! event earlier this month when Uber and Lyft drivers gathered at the Sea-Tac Airport ride hail waiting lot to share their stories of declining pay and unjust deactivation as Uber prepared for its initial public stock offering on May 9.

Both actions were organized by drivers who are members of the App-Based Drivers Association, an organization that promotes justice and transparency in Seattle's personal transportation industry.