Looking ahead to the 2015 legislative session

With the election just one day away, it's time to start looking ahead to the upcoming legislative session in Olympia.  With the anticipated makeup of the legislature, it is likely to be an extremely challenging session again next year.

After talking to members across the state, your Union's political action department has identified the following priorities for the 2015 legislative session: 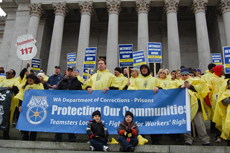 Despite the important role correctional employees play in keeping our communities safe, Teamsters at the Department of Corrections are severely undercompensated for the critical public safety work they perform.

According to the State’s 2010 and 2014 salary surveys, DOC employees in nearly all job classifications are compensated at a rate of between 10-40% less than employees in other jurisdictions who perform similar work.

A neutral arbitrator has recently issued an award that takes a small step toward rectifying this injustice. The arbitrator has called for a 5.5% general wage increase for DOC employees in the first year of the 2015-2017 biennium and a 4.3% increase in year two.

In addition, the arbitrator has awarded:

These increases do not come close to bridging the enormous compensation gap between correctional employees and their peers. It’s time to correct this injustice and fully fund the DOC contract. The men and women who staff our State’s prisons deserve equitable pay, dignity, and respect.

For the last two years, Teamsters Local 117 has supported efforts to pass a bill which would allow health care professionals at the Department of Corrections to participate in the State’s Public Safety Employees’ Retirement System (PSERS). PSERS was created for public employees whose jobs contain a high degree of physical risk to their own personal safety. Medical staff who work inside our State’s prison system treat violent offenders on a daily basis. They deserve to have a secure retirement.

Over the last two years, many Local 117 members have testified in support of a PSERS bill for DOC medical staff (HB 1923). In 2012, the House passed HB 1923, but the bill ultimately died in the Senate. Our goal is to pass the bill this year.

As independent contractors, Teamster taxi cab operators are mandated by the State to purchase L&I insurance for themselves and leasees without an employee/employer relationship. Under current law, taxi drivers are required to pay the same rate as security guards and armored car drivers. Taxi cab operators need the option of whether to participate in the program, an adjustment to a more suitable L&I premium rate, as well as a cost-sharing system between taxicab owners, drivers and dispatch companies with language to prevent a transfer of costs from dispatch companies to operators.

Representative Cyrus Habib (48th District) sponsored a bill (HB2152) in the 2014 legislative session that would have addressed these issues. Dozens of taxi cab operators and other Teamsters lobbied in support of the bill. The House or Representatives overwhelmingly passed the bill on a vote of 93-1, but the bill died in the Senate. We will be supporting this legislation again in the 2015 legislation session.

The personal transportation industry has changed dramatically over the last few years. New entrants into the market, such as Uber and Lyft, have operated outside of the regulatory framework with no accountability over issues related to insurance, licensing, background checks, etc. This has given some players in the industry a competitive advantage while harming the ability of many drivers to earn a living. We will be supporting statewide legislation to ensure a level playing field for for-hire drivers in the industry.

In 2012, labor and community groups teamed up with progressive small businesses to help pass a Paid Sick Days ordinance in the City of Seattle that allows workers to recover from an illness or care for a sick child without losing a day’s pay. Since 2012, we have been working to pass a similar law in the City of Tacoma.

In 2013 and 2014, we supported HB 1313, a bill that would provide paid sick days for workers in Washington State, and we will be supporting efforts to pass similar legislation again this year. By ensuring that every worker in our state can earn paid sick days, we can improve our economic security, public health, and business productivity.

We will be supporting efforts to pass a transportation revenue package which would create jobs by funding much-needed infrastructure and public works projects.

Again this session, we will be opposing all attacks on the State’s workers’ comp system that protects workers when they are injured on the job.

Teamsters Local 117 is part of a coalition of labor, community, and faith-based groups supporting efforts to rebuild the middle class, protect and invest in jobs with dignity, and defend against attacks meant to weaken the rules that support working families. We will be supporting public policy that: