Exiting news from Olympia! The Senate has voted unanimously – 97 to 0 – to pass our bill (SB 6286) to extend assault benefits for correctional employees.

You can watch the floor debate and vote at www.tvw.org.

Our bill has made excellent progress because hundreds of Local 117 members have taken the time to contact their legislators through email, phone calls, or in-person visits.

At our recent Public Service Matters lobby day on February 13, we were able to speak directly with 45 out of 49 Senators about the bill. We also met with dozens of legislators in both the House and Senate at our DOC lobby day on January 25.

Thank you to all of the people who have worked so hard to pass the bill.  This is another strong indication that your voice really does make a difference! 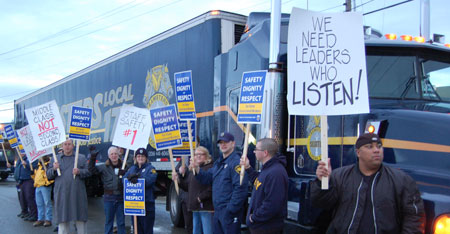 We have scheduled two major informational picketing actions - one on the westside at MCC and one on the eastside at WSP on Thursday, June 11 from 12-4pm. All union members and their families are encouraged to attend.

If you plan on picketing with your union brothers and sisters, please RSVP by clicking on one of the links below:

This action is necessary to send a strong message to the state legislature. Lawmakers have spent too long arguing over the budget. The Senate in particular is holding up the process by making funding our DOC contract contingent on a law that would weaken our collective bargaining rights.

By delaying the process, the Senate is risking a government shutdown that will lead to the temporary layoffs of hundreds of members at the DOC.

We demand that the legislature pass a budget now that includes funding for our contracts with no strings attached.

Please make an effort to attend the picketing action on June 11. And spread the word among your co-workers.

If you work at another facility and/or are unable to attend, you are encouraged to organize group photos of members to share on social media.  Talk to your Business Rep about coordinating an action at your facility. 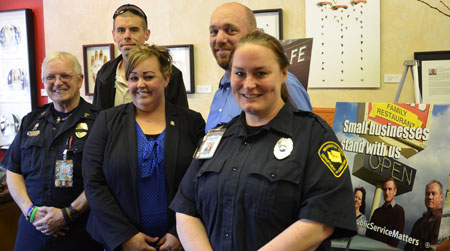 Members of Teamsters Local 117, in coalition with other state employee unions, held a press conference in Olympia yesterday.  The event, which took place at the Capitol Florist, highlighted the support of small businesses for funding state employee contracts.

The op-ed piece highlights the critical work of corrections and calls on the state legislature to fully fund the contract for correctional employees.

You can view the entire piece on the WWUB website.  The piece is also published in its entirety below: 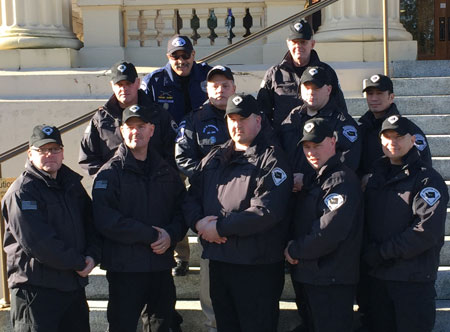 The first week in May is Public Service Recognition Week (PSRW).  This is a time to showcase the accomplishments of our public servants and to express our gratitude for the important services they provide.

Our members who work in the public sector clear our streets during snow emergencies, maintain our roads, clean up our parks, and keep our communities safe.

Too often public employees are the target of unwarranted criticism, but when disaster strikes they are the first to respond.  We need to honor them.

Community Groups Sign On in Support of State Employees

Dozens of community groups have joined unions and other supporters to sign a letter that will be sent to legislators calling for full funding of the contracts for state employees. 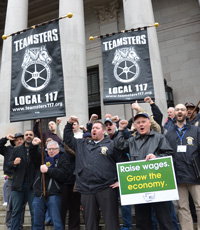 An astounding 43 legislators in the House have signed onto a bill that would allow workers in the State of Washington to earn at least 40 hours of paid sick and safe leave annually.

The bipartisan support for the legislation is indicative of broad public support. 74% of Americans support Paid Sick Leave.

Over the last two years, Teamster taxi drivers have worked hard to help create a level playing field for all drivers in our region’s personal transportation industry.

Representatives of the Western Washington Taxicab Operators Association (WWTCOA) successfully negotiated a policy in Seattle that gives taxi drivers a fighting chance to earn a living for themselves and their families. 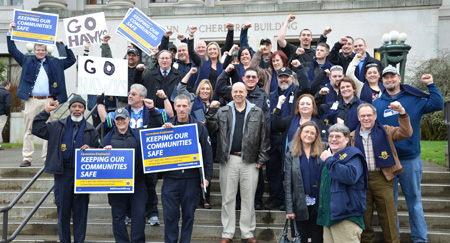 Over 200 Teamsters from the Department of Corrections converged on Olympia yesterday for our 2015 DOC Lobby Day event.  Members from all across the state met with dozens of legislators to talk about the importance of getting our DOC contract funded.

“Legislators need to understand that funding our contract is our most important priority,” said Charles Cline, an officer at Stafford Creek Corrections Center.

“We came out to fight for what we rightfully deserve. We work 100% of our time with violent felons. We risk our lives every day and never have the guarantee that we get to go home to our families.”

Both Logan and Cline were enthusiastic about the event.

“It was a great experience,” Logan said. “We got some good outcomes. All three legislators we spoke with said that they fully support us. They also thanked us for the work that we do in keeping the community safe, keeping families safe, and keeping them safe. They said they admire the work that we do. It was good to hear that.”

In addition to advocating for a fair DOC contract, members spoke about the need to include DOC medical staff in the PSERS retirement program and to pass a statewide paid sick days bill.

Thank you to all of the members who took time out of their busy lives to attend the event. Your voice makes all the difference!

ACT NOW! For folks who were unable to attend, please take 2 minutes to call the legislative hotline in Olympia at 1-800-562-6000 and urge your legislators to fund our DOC contract!

View photos from the event here!