Fred Meyer Teamsters: The IBT Has your Back! 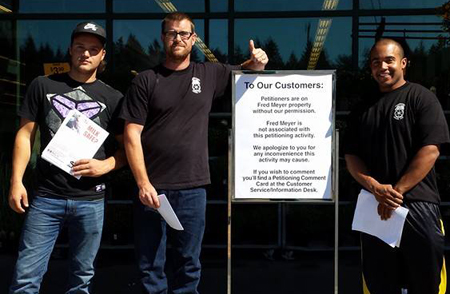 The International Brotherhood of Teamsters (IBT) has officially sanctioned strike benefits for 388 warehouse workers employed at the Fred Meyer distribution center in Puyallup and an additional 4,318 Teamsters who could become involved in connection with a potential work stoppage at the facility. Fred Meyer is a subsidiary of Kroger, Inc., a $100 billion company and the second-largest grocery retailer in the country.

“We fully support members of Local 117 fighting to maintain their jobs and healthcare benefits at Fred Meyer,” said Steve Vairma, Western Region International Vice President of the Teamsters and Director of the Teamsters Warehouse Division. “As the employer, Fred Meyer will not be allowed to dodge its responsibilities to preserve secure jobs and equitable benefits for our hardworking members who contribute to the company’s success every day.”

Contract negotiations between Teamsters Local 117, the Union that represents the nearly 400 workers at the Puyallup warehouse, and Fred Meyer began on June 13. The Union and the Company last met on September 9, but talks broke off when Fred Meyer insisted on degrading workers’ health care coverage and on securing the ability to outsource the workers’ jobs to a third-party subcontractor.

“Fred Meyer is trying to bully grocery warehouse workers by threatening to erode their health care coverage and outsource good, local jobs. These workers play a vital role in maintaining the food supply chain that helps feed families across the Pacific Northwest. By holding these workers hostage, Fred Meyer is irresponsibly putting our food supply chain and our communities at risk,” said Tracey A. Thompson, Secretary-Treasurer of Teamsters Local 117.

Over the weekend of August 23-24, warehouse workers voted 241-2 to authorize a strike. On September 13, the workers and their allies took part in a multi-state leafleting action to educate Fred Meyer customers in Alaska, Oregon, Idaho, and Washington State about the health care and outsourcing issues. Workers also talked with consumers about the mistreatment of workers and animals on the dairy farms that supply Fred Meyer’s milk. The effort was organized by the Farm to Family Coalition, an association of labor, faith, environmental and organic food activists aimed at promoting food safety and workplace justice across the supply chain.

Warehouse workers at three other major groceries – Safeway, SuperValu, and Unified Grocers – voted to ratify their contracts in July, leaving Fred Meyer as the only Teamster grocery warehouse in the area that has not settled its contract. The Union and the Company will meet in federal mediation on Monday, September 22.

Teamsters Local 117 represents approximately 16,000 members, with over 1000 members who work in the grocery warehouse industry.