Teamsters March from SeaTac to Seattle in Fight for 15 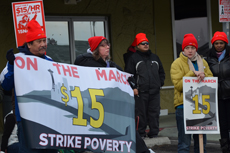 Fresh from the Proposition 1 victory in the City of SeaTac that will dramatically improve wages and working conditions for over 6,000 low-wage workers at SeaTac Airport, Teamsters 117, together with a number of other unions, is taking the fight to increase the minimum wage to $15 per hour to Seattle.

Workers launched the “Fight for $15” campaign by marching 15 miles, from the airport in SeaTac to downtown Seattle, where they held a rally on the steps of City Hall on December 5.

"This is a groundbreaking effort that has the potential to improve the lives of working families, not just in SeaTac or Seattle, but across the country," said Tracey A. Thompson, Secretary-Treasurer of Teamsters 117.

One of the workers whose life will change from the victory in SeaTac is Abdirahman Abdullahi, a Local 117 member who transports rental cars to and from the airport for Hertz.

Abdullahi worked on the Prop 1 campaign in SeaTac, knocking on hundreds of doors to talk with voters about the initiative.
“Too many workers are making poverty wages,” he said. “They don’t have full-time work and they have to work 2-3 jobs just to pay the bills and survive.”

“Now with the passage of Proposition 1, workers will earn a livable wage, paid sick days, and have full-time work. If you get a good job with a livable wage, you can go to school, you can support your family, you can pay your bills, and you can take your kids to the doctor. This will change the entire community.”

Workers in Seattle and across the country deserve the same opportunities.