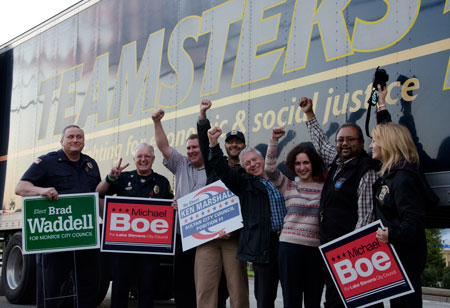 After thousands and thousands of phone calls, and hundreds of doors knocked, we’re proud of our work in 2013.

One of our goals this year was to elect Teamsters to local office – local city councils, school boards and mayors.

We’re proud that we’ve elected Teamsters to city councils in Kent, Sultan, and Lake Forest Park; we’ve elected a new Mayor of Stanwood who is a Teamster, and the newest member of the Kiona-Benton School District is also a Teamster.

Our “Farm Team” of Teamsters who can look to running for the state legislature one day will build a constituency, learn about issues facing their local communities, and become familiar with issues important to our members.

We also chalked up wins in SeaTac, electing a new pro-worker member to the city council and passing Proposition 1 to ensure workers at the airport make a living wage.

All in all it was a successful year for our members at the ballot box.