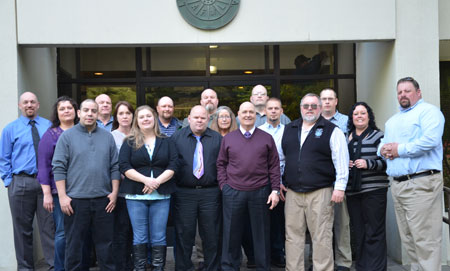 The DOC bargaining committee met in Tukwila yesterday to finalize preparations for negotiations over your 2015-2017 collective bargaining agreement.

Members of the team engaged in the final review process of proposals that were developed prior to and during the DOC Shop Stewards’ seminar on March 21.  The proposals are based on your direct feedback through contract surveys and at demands meetings.

Bargaining will cover all elements of the contract, including wages, overtime provisions, leave, bidding rights, seniority, as well as a variety of other issues.  The first session with State negotiators begins on April 23, in Tukwila. Bargaining is also tentatively scheduled for May 13 and 14 in Olympia.

Your Union’s Secretary-Treasurer Tracey A. Thompson, General Counsel Spencer Thal, and Director of Corrections & Law Enforcement Michelle Woodrow will serve as the lead negotiators on your Union’s bargaining committee.

Rank-and-file members on the committee are:

Throughout the bargaining process, we will be sending out contract negotiations updates.  You can sign up to receive updates on your Union’s website here.

These negotiations will be somewhat different than previous bargaining in that we now have a new tool at our disposal:  interest arbitration.  Our newly-won interest arbitration rights allow us to present proposals over mandatory subjects of bargaining before a third-party arbitrator should we reach impasse with the State.

"We're going to stand our ground and let them know that we've got the arbitration, which is the tool we're going to use if they're not willing to negotiate fairly with us.  Because that's what it's going to come down to - fair negotiations," said Ronnie Matsen, a Shop Steward at Stafford Creek Corrections Center (SCCC).

During bargaining, we may need to call on you to help demonstrate the importance of one or more of our proposals.  We will notify you if this is the case.  In the meantime, be sure to check your Union’s website for updates.  Thank you for your service to our communities and remember to stay safe.

Together, we can win a fair and equitable contract for Teamsters at the DOC!

Sign in with or
Don't have an account? Click here to create one.
Please check your e-mail for a link to activate your account.
No recent activity
DOC bargaining kicks off.
DOC Bargaining Committee - Working Hard for You
TEAMSTERS POWER