A family of Teamsters at Coke spanning three generations

“As long as those trucks are rolling, stay close to them and you’ll be fine.” That was the advice Dave Campbell gave his son, Jake, who went to work for Coca-Cola as a merchandiser when he was still in high school. 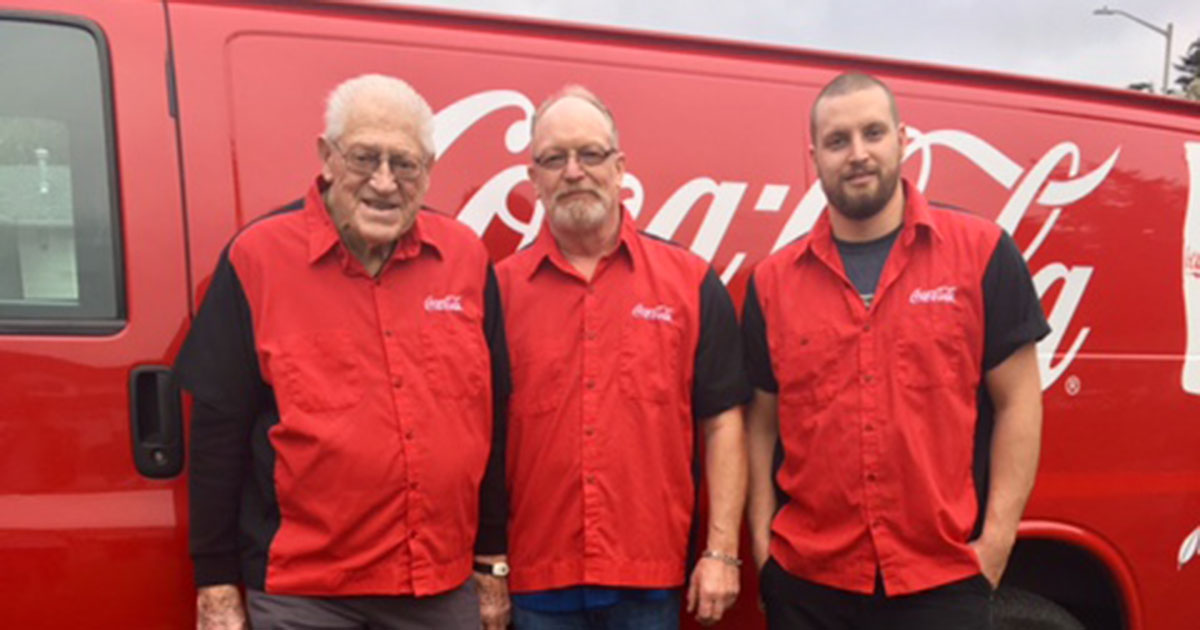 “As long as those trucks are rolling, stay close to them and you’ll be fine.”

That was the advice Dave Campbell gave his son, Jake, who went to work for Coca-Cola as a merchandiser when he was still in high school. It was the same advice Dave’s father-in-law, Gene Kettle, had given him when Dave launched his own Teamsters career 36 years ago.

In all, the family’s employment at Coke has spanned three generations for a combined 75 years of service.

Gene started as a Teamster at the company back in 1955, but eventually promoted into management and went on to run operations at Coke’s Marysville branch. Dave recalls his father-in-law telling stories of a Coke strike back in the 70s’. “They hired a bunch of Huskies to load trucks,” he said. “One of them knocked over six pallet boards and half buried a route truck in glass. They fired them all.”

As for Dave, he took his father-in-law’s advice and stayed close to the trucks. “I’ve seen a lot of mangers come and a ton of them go. Those trucks have been running for a long time. I knew as long as I stayed close to them, I’d be able to survive.”

"I knew as long as I stayed close to the trucks, I’d be able to survive."

Dave not only survived at Coke, he thrived. He raised a family on good union wages and decent benefits. Now, more than three decades later, he’s closing in on an early retirement. “I’d like to think of myself as a pretty young man and I’m retiring here in 25 days,” he said.

Dave started his career loading trucks at night. After seven years of heaving product and moving pallets, other opportunities arose. “They brought me into the shop, started training me on how to fix different pieces of equipment, the vending machines, the coolers.  Then I established my own route up north, from Marysville up to Stanwood. That’s what I’ve been doing for the last 25 years.”

A critical juncture in Dave’s career occurred back in 2010. In bargaining, Coke was intent on eliminating medical benefits for retirees.  Dave stood together with his co-workers and went on strike to preserve those benefits. He picketed up in Marysville and passed out leaflets at a Seahawks game.

Coke ultimately backed down and agreed to maintain medical coverage for its retirees. Thanks to the success of the strike, Campbell is now able to utilize the same benefits he and his co-workers fought so hard to keep.

With retirement just a few weeks away, Dave bought a new travel trailer, which he plans to take on the road. But for now he’s content to give himself a well-deserved break.  “Just hanging out a little bit,” is what he says he’ll do. “Nothing major right from the get go. Kick back and do a little fishing.”