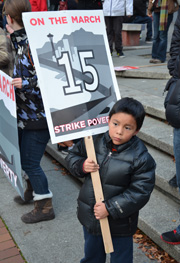 Companies like WalMart, and McDonald’s, whose business model depends on the minimum wage, are quite profitable.  But the quiet story behind much of that profitability is that we as taxpayers are subsidizing their profits.  Those companies, as well as many others, provide help to their employees to apply for food stamps and other taxpayer supported aid so that they can survive.  Those companies know that their own employees can’t make it on a minimum wage.  The result is our taxes provide profit to the shareholders and executives of those companies.

Some companies today, as a result of the $15.00 movement, are raising wages in part because of public pressure, but also because their own employees cannot afford to shop in their stores.  They can’t sell their product if consumers don’t have the money to buy it.  That’s why so many small business owners in SeaTac supported the ballot initiative.  They knew that if people have more money in their pocket they’ll spend it.

Recognizing that fact, years ago Henry Ford paid his production workers the unheard sum of $5.00 per day to produce Model T’s.  The business community was up in arms that Ford was upsetting the lower wage rates of that era.  Ford replied that he did it so that his workers could afford to buy the cars that they made.  He was expanding his market and improving the economy as whole, as well as providing job security for his workers.

Fighting to raise the minimum wage is not only the right thing to do, it also protects our members and their contracts.