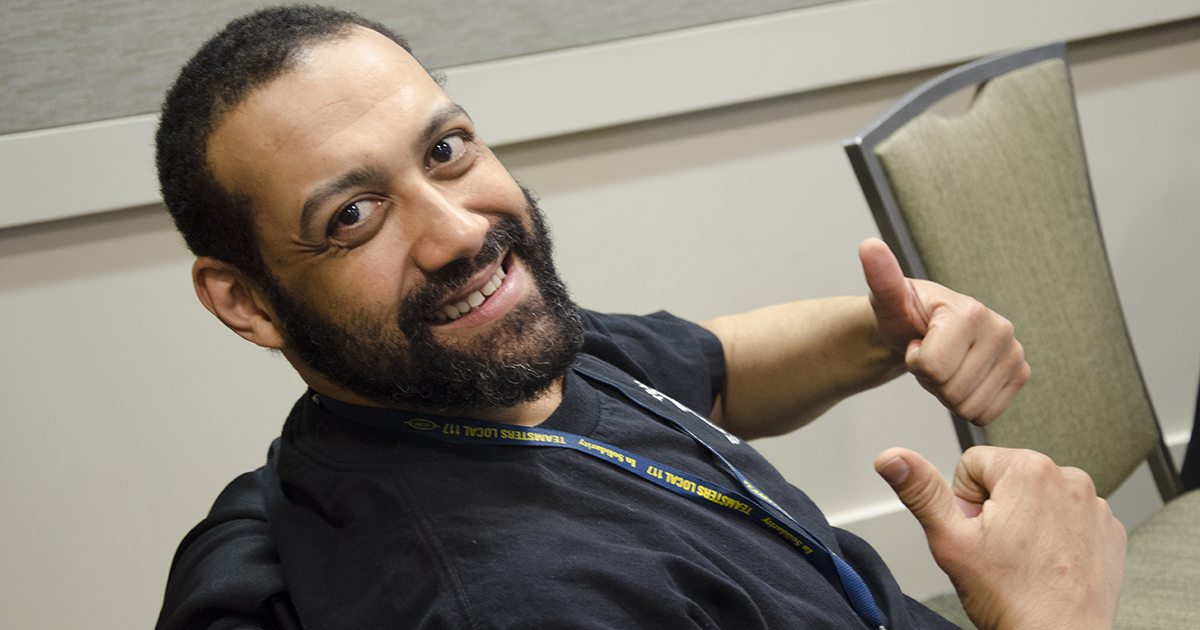 Johnnie Uzzell joined our Local 117 staff as a Union Representative on January 23.

Johnnie is outgoing, with a contagious personality. By his own admission, he loves to talk, but he’s a problem solver as well. Johnnie started his new job on January 23. Before joining our Local 117 staff, he worked in the laundry industry at Aramark where he was a Shop Steward. He also worked for four years as a Local 117 driver in the solid waste industry at Rabanco (now Republic).

Johnnie will be representing members in the laundry industry and several other private sector jurisdictions. We sat down with Johnnie and talked about his career as a Teamster and his new job.

I was a Teamster at Rabanco for about four years, then moved to a non-Union job. It wasn’t until later that I realized I was missing out on a lot of opportunities. I had no pension, medical was higher. I just had a kid. I thought – maybe I should rethink this Union thing.

How did you get more involved in the Union?

I got back in the Union with Aramark. I noticed how the company did things – big business, big corporation, just railroading people. We fought for some things. Eventually, I decided to run for Shop Steward and I got voted in. I think one of the biggest compliments I got was, “Johnnie, the reason I voted for you is that we might not see eye-to-eye on anything politically, but you still treat me the same as everybody else.”

What did you work on in your role as a Shop Steward?

Getting everybody on the same page. Getting everybody to read the contract. You’d hear, “Oh, I didn’t get my bonus on time.” I’d get them to read the contract on that. I wanted to make sure people know their rights, know when they have to go to the Shop Steward, when they have to go to the Rep. Education and teambuilding was the biggest thing I did as a Shop Steward.

I’m a sports guy. I was an Air Force brat. If you can play sports, it’s easy to bond, it’s easy to meet people. Then I started coaching. That really fulfilled me. I coached football, baseball, basketball. I had so much fun - just watching the glow in the kids’ eyes. When you get a bunch of three or four-year-olds looking at you, and actually listening to you, you feel like you just conquered the world.