Multiple Unfair Labor Practices may provoke a strike at Sysco 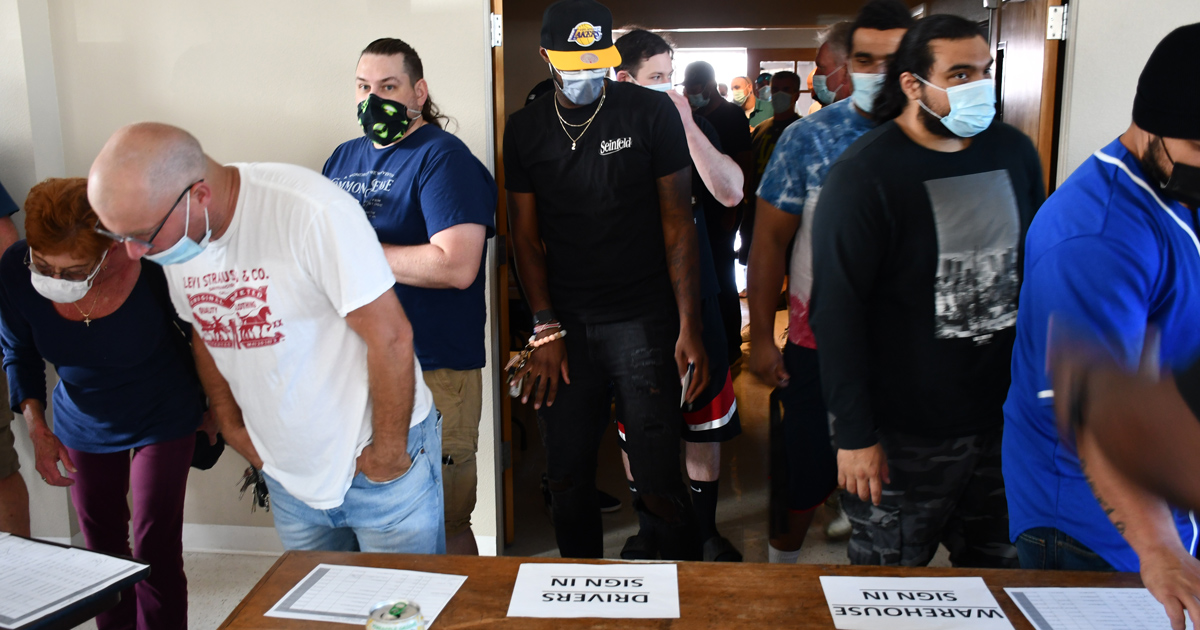 Teamster drivers and warehousers get signed in for the strike authorization vote meeting on Saturday in Tacoma.

Judging from the combative spirit in the room, there was never a doubt how the Sysco strike authorization vote would go down. The only question was whether it would be unanimous.

In the end, that's exactly what it was - a 100% yes vote. With that result, the group of 250 Teamster drivers and warehouse workers, employed at the massive food service conglomerate's distribution center in Kent, sent a powerful message of unity and determination to their employer on Saturday.

As with many other Teamsters, the pandemic has exposed them to unprecedented health risks while at the time underscoring the essential nature of their work and the service they provide our communities.

"It's been a challenging experience over the last year and a half protecting my health and that of my family, my customers, and my coworkers," said Erick Engel, a 17-year Teamster and shop steward on our Union's negotiation committee.

"We are the only ones at Sysco who have been put on the frontlines since day one, the only ones taking the risks. We need to have that represented in our new contract."

Fellow shop steward and bargaining team member, Rowan Griffin, predicted a unanimous vote and was even more fired up when the final results were tallied.

"This lets them know that we're ready, and we mean business," he affirmed. "Make us the offer that we deserve. We work hard, they know we work hard. So pay us what we're worth, that's all we ask."

Earlier this month, after our Local 117 negotiations with the company were well underway, 125 Teamsters employed at Sysco in a suburb of Chicago went out on a four-day unfair labor practice strike protesting the company's refusal to bargain in good faith.

At the outset of the strike, Teamsters Local 703 Vice President Pat Bruno expressed his frustration: “One year ago, Sysco’s CEO referred to his employees as ‘heroes’, as the men and women who helped keep America fed. Now they won’t even offer a fair wage increase. These are the essential workers that kept hospitals and schoolchildren fed throughout the pandemic’s darkest days."

Our Union has filed multiple unfair labor practice charges with the NLRB alleging that Sysco has engaged in unlawful subcontracting, skimming of bargaining unit work, and failing to provide COVID-related information to the Union. But based on recent negotiations, it might be the Company's bad-faith bargaining that ultimately provokes a strike.

John Scearcy, Secretary-Treasurer of Teamsters 117, emphasized that point: "Teamsters at Sysco have worked exceedingly hard throughout the pandemic to serve schools and hospitals across the Pacific Northwest," he said. "Sysco needs to stop mistreating their workers and bargain a contract in good faith. Our members understand the value of their labor and will defend their livelihoods if necessary."

The Sysco Corporation, based in Houston, TX, is the largest food distribution company in the world. Teamsters employed at the company's distribution center in Kent, WA, house and haul food service products to restaurants, schools, and hospitals throughout Western Washington as well as to major area businesses such as Amazon, Microsoft, and Lumen field.