The power of Teamsters 117. 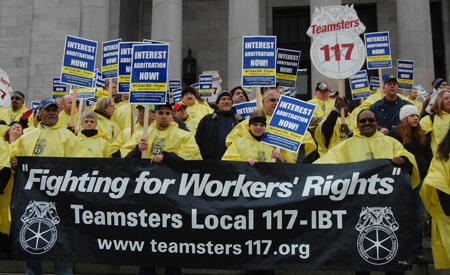 This isn’t the first time Teamsters from different industries have supported each other.

At our DOC Day of Action event in 2012, dozens of Local 117 members from the private sector stood on the Capitol steps in Olympia to demand safer working conditions for state correctional employees. Later that year, correctional employees returned the favor when they walked the picket line in solidarity with our members at Davis Wire who were on a three-month unfair labor strike.

This is the power of Teamsters 117. Members in dozens of industries, from the public sector, private sector, and the DOC speaking together with one powerful, united voice.

Later this month, on January 28, we have our first Teamsters Lobby Day of the 2014 legislative session. We have confirmations from over 90 members, who will be meeting with their representatives throughout the day. As union members, we will be asking legislators to support a range of issues, impacting Teamsters at the DOC, members in other public sector jurisdictions, and the private sector.

The common thread of our legislative agenda is our steadfast commitment to protect and expand the rights of all working people. That is the work of our Union, and that is why we fight. We encourage you to join us in that fight.