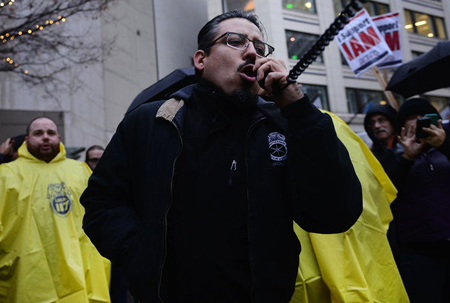 Teamsters joined hundreds of union members last night at Westlake Park in the heart of downtown Seattle to stand in solidarity with Boeing Machinists who resoundingly rejected a company proposal, which would have converted the workers' pension plan to a 401k, slowed wage progression, and have forced workers to shoulder more of the cost of health care.

"We are fighting to defend the middle class. And when we stand together and fight, we win."

In the pouring down rain, Local 117 members led the group in a series of chants:  "Union - Power!" "When we fight, we win!"  And "Build it here!" in reference to the new 777x that Boeing has threatened to produce out-of-state unless the Machinists agreed to the company's terms.

With the sales of Boeing aircrafts booming and the company raking in record profits, workers are being asked to accept concessions that would further erode middle class jobs in our community.

"Workers across the country are under attack," said Tracey A. Thompson, Secretary-Treasurer of Teamsters Local 117, who spoke at the rally. "Instead of building up our community by preserving good family wage jobs, corporate executives are enriching themselves and tearing down the middle class.  We've got to fight back.  And when we stand together and fight, we win!"

Sign in with or
Don't have an account? Click here to create one.
Please check your e-mail for a link to activate your account.
No recent activity
Teamsters stand in solidairty with the Machinists.
Teamsters Stand with Machinists
TEAMSTERS POWER