Teamsters stand in solidarity with the Machinists. 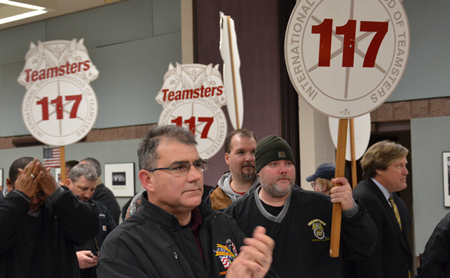 Boeing’s behavior throughout the process has been shameful.   The company is reaping in record profits and has a backlog of orders that will sustain those profits well into the future.  Boeing stock has risen 81% in the last year alone.

But instead of rewarding workers who have built the company from the ground up, Boeing executives are looting the company, hauling in millions in corporate bonuses, while demanding that communities commit to billions in tax breaks and workers sacrifice their retirement security.

Make no mistake – 401k plans, while now widespread, do not provide working people with the retirement security that defined benefit pensions provide.  With 401ks, workers must invest their own money and then bear all of the risk of those investments.  If their investments lose money, as they did in dramatic fashion during the Great Recession, workers’ retirement savings can be decimated.

Whatever the rank-and-file Machinists decide today, we as Teamsters, stand in solidarity with our Brothers and Sisters.  The Machinists are under tremendous pressure from Boeing, the media, and elected officials to accept a concessionary contract.  But a yes vote will mean that current and future generations of Machinists will see their retirement subject to the whims of Wall Street.