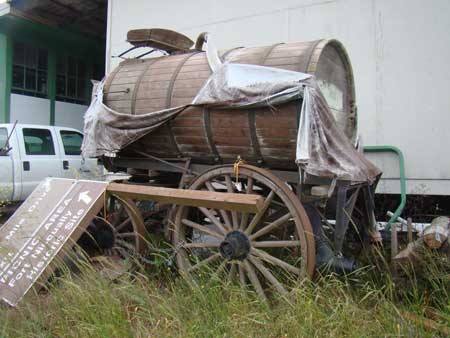 Street sprinklers were invented in the 1850s as a means to suppress airborne dust on unpaved roads. Street sprinkling was necessary because the accumulation of manure and horse urine, as well as other foul and vile contributions from overflowing cesspools and the like, was considered a health hazard by physicians.

They feared tuberculosis, cholera, and even polio could be transmitted by breathing the offensive smelling dust coming off city streets. Of course, it was also a nuisance for business owners and shopkeepers as the dust settled on everything from desktops to farm fresh produce, sometimes making the latter completely worthless. Sprinkling the streets was absolutely necessary to keep the dust at bay.

Street sprinkling wagons were operated by Teamsters who filled the tanks from hydrants and traveled slowly up one side of the street and down the other, dampening the ground along the way. Some entrepreneurs operated their own wagons and contracted for the service while larger cities usually assumed responsibility for protecting public health and safety. Such was the case at the City of Tacoma. They had several sprinkling wagons operating near the turn of the century.

Recently one of these wagons was found hiding under a tarp in a maintenance yard out at Point Defiance Park. It’s believed to be one of the wagons that wasoperated by the Street Maintenance Division of Public Works. The assumption is that Street Maintenance, as it was then called, probably gave the street sprinkler to the fledgling Metropolitan Parks Department after the Division switched to motorized trucks and the City’s streets were paved. The Parks Department used it to keep the dust down on Five Mile Drive in Point Defiance Park.

Metro Parks has returned the wagon to the City of Tacoma and City employees, many of whom are members of Teamsters Local 117, have volunteered to work on the wagon’s restoration after hours without compensation. They’re doing this to showcase their proud heritage as Teamsters and to shed light on the long history of Public Works in Tacoma.

When completed, the wagon may be used in parades or could be displayed at the Western Washington Fair in Puyallup and other events. It was featured at the American Public Works Association of Washington (APWA-WA) Spring Conference in Tacoma in April and is scheduled to appear at the Teamster’s Auto Show in Tukwila on June 21st.

If you would like to volunteer or contribute funding for the restoration, please contact Chris Ott at [email protected] or 253-591-5929.