Members of Teamsters 117 joined together today with grocery store workers, baristas, adjunct professors, nursing home workers, students, and other labor activists for a march through the streets of Seattle to "raise the alarm for workers' rights." 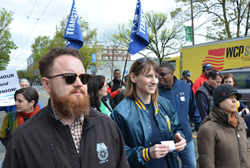 Members of Teamsters 117 joined together today with grocery store workers, baristas, adjunct professors, nursing home workers, janitors, students, and other labor activists for a march through the streets of Seattle to "raise the alarm for workers' rights."

The event was one of dozens held in cities across the country in support of working families on what was billed as a National Day of Action.

Grocery store workers kicked things off near the new light rail station in Seattle's Capitol Hill neighborhood, calling for developers to reject the bid of New Seasons Market, a non-union outfit based in Portland, in favor of a local, unionized grocery store at the location.

Workers then marched south to Seattle University, where they joined a picket line in support of adjunct faculty who are demanding that the university recognize their union. The adjunct staff held a union election over two years ago, but the university has refused to count the votes, blocking their right to unionize and dragging out the process on appeal.

Pro-worker rallies also took place in front of Starbucks at the Pike Place Market to draw attention to insecure schedules for baristas and at Wells Fargo bank downtown to protest a top executive's connection to the extremist "Freedom Foundation", a group funded by wealthy special interests that is attacking workers and their unions.

View a photo gallery of the event here

Sign in with or
Don't have an account? Click here to create one.
Please check your e-mail for a link to activate your account.
No recent activity
Teamsters join day of action in support of working families
Teamsters raise the alarm for workers' rights
TEAMSTERS POWER