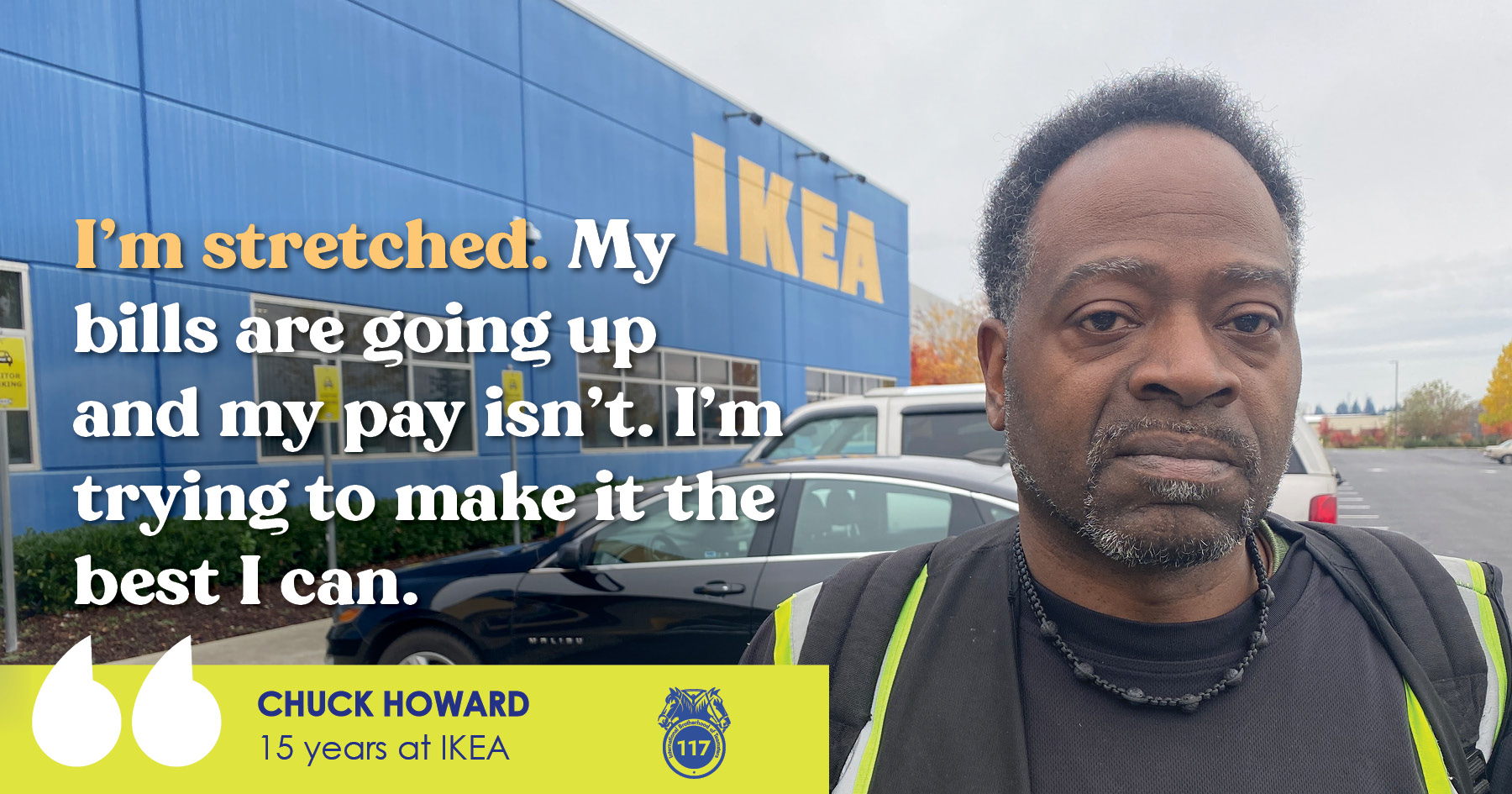 Warehouse workers like Chuck Howard are fighting for fair pay.

Spelled in big, red letters across the wall of the IKEA distribution center in Spanaway reads their mission statement: “A better everyday life for the many people.”

But for the 120 Teamsters who work at the facility and supply our region with DIY Swedish furniture, these are just empty words. In November, the group voted unanimously to authorize a strike in response to the company’s proposal set to keep them trapped in a cycle of poverty.

IKEA is an international Goliath that likes to project a politically correct face to the public while squeezing the wages of its American workers. It is not something they would try at home in Sweden, where an overwhelming majority of the workforce is organized into labor unions and “The Swedish Model” elevates workers’ wages and wellbeing.

In Seattle’s backyard, however, IKEA wants to slash the real earnings of its employees by proposing “raises” of less than 50% the rate of inflation.

TWO JOBS TO PAY THE BILLS

“I left a good-paying job to work here because I wanted to be in a different environment and a family culture that IKEA projects,” said Nichoelas Pederson, who has worked in operations and as a trainer at the company for over 10 years. “In reality, they are not living up to their propaganda. I work another job outside of here just to pay my bills. They are all about numbers and don’t care about people.”

With profits of 12.88 billion Euros in 2021, IKEA has plenty of cash to spend on projects they believe in. In a partnership with the Rockefeller Foundation, the furniture dealer has invested in a poverty reduction program with wildly-ambitious goals. It’s just that paying a living wage to the workers on whose backs the profits are made is not something IKEA believes in beyond a slogan on the wall.

If one digs a little deeper, this controversy is not surprising. Over the years, the discount furniture behemoth has been caught up in scandals of greenwashing, price discrimination, and illegal timber extraction in Ukraine.

Corporate hypocrisy at IKEA was perhaps most fully on display during a labor dispute in Canada in 2012. Rather than increase low pay for workers at a store in British Columbia, IKEA locked out members of Teamsters Local 231 for 17 months and brought in replacement workers to try to bust the union.

The lockout lasted 527 grueling days. Ultimately, Teamsters in Canada prevailed, settling their contract, and IKEA was forced to pay damages to Local 231 for violating federal labor law during the dispute. 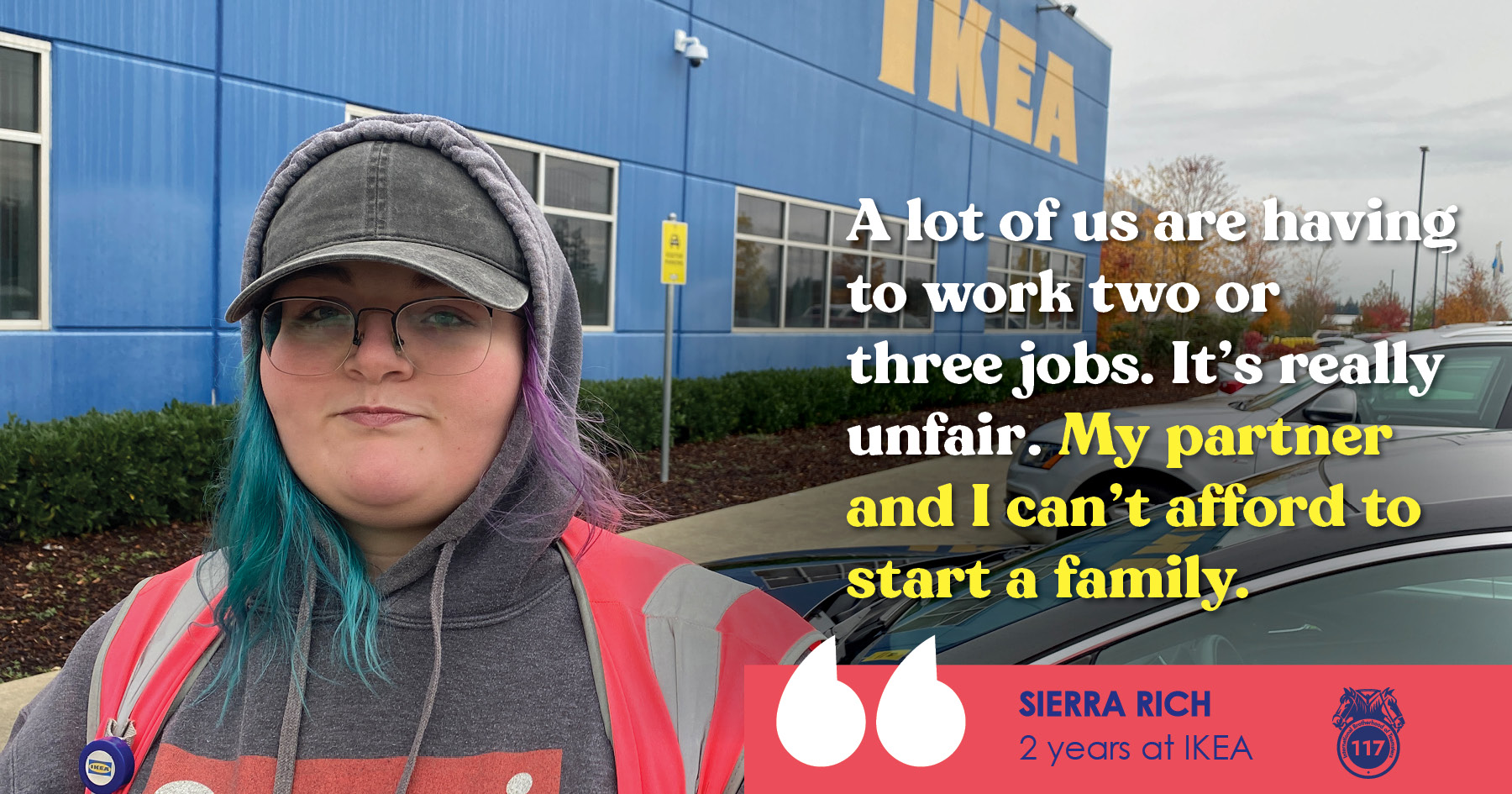 Like their Sisters and Brothers to the north, Teamsters who operate the Spanaway warehouse are also refusing to bow down to the corporate giant. Their strike authorization vote comes after months of union members working under an expired contract and negotiations yielding little progress on the wage line.

"Our members have sent a clear message to IKEA that they will no longer tolerate poverty wage proposals," said John Scearcy, Secretary-Treasurer of Teamsters 117. "A strike is imminent if the company continues to fail to recognize their labor."

For warehouse workers in Washington State, IKEA's PR blitz on poverty just adds insult to injury. "It's a slap in the face," said David Foster, a worker at the Spanaway facility who lives in federally subsidized housing. "They say they want to end poverty, but the pay they’re proposing won't even cover my gas to get to work."