Teamsters at Northwest Steel and Pipe Vote Unanimously to Strike! 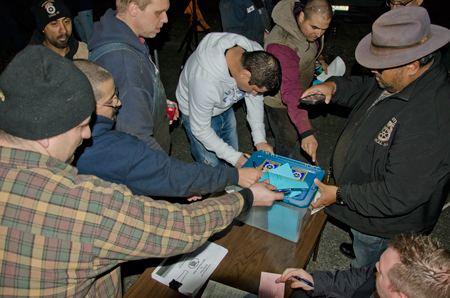 “Northwest Steel and Pipe is pushing its workers to the brink of a strike by its repeated, unlawful actions,” said Tracey A. Thompson, Secretary-Treasurer of Teamsters Local 117. “Through regressive tactics and failure to bargain, the company is threatening to destroy workers’ livelihoods, eliminate their retirement security, and significantly degrade health care coverage for their families.”

The contracts for both groups expired on November 30, 2014. “We have been attempting to bargain in good faith and our members have been working without a contract since late last year,” said Nick Lansdale, Business Representative of Teamsters Local 313.

Negotiations between Northwest Steel and Pipe and Teamsters Local 117 began last December. Local 117 and the company last met on March 23 in federal mediation. In that meeting, the company introduced a new proposal to eliminate the workers’ defined benefit pension. The proposal came after representatives of the company had assured the Union in previous sessions that they were not interested in taking away the workers’ defined benefit pension.

“Many of us have devoted decades of our working lives to make this company successful,” said John Osko, a warehouse worker and Local 117 Shop Steward. “The thought that after four months of bargaining they would make a proposal to take away our retirement security is a real blow. We don’t want to strike, but we’re ready to defend our livelihoods and our legal rights if we have to.”

In negotiations with Teamsters Local 313, the company refused to offer bargaining dates and cancelled bargaining on several occasions. Local 313 filed Unfair Labor Practice charges with the NLRB over the company’s failure to bargain yesterday.

In an effort to avoid a strike, the Union reached out to the company today to urge it to return to the bargaining table and bargain a contract in good faith that its workers can ratify.