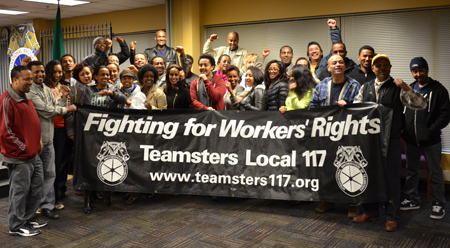 Today workers passed out leaflets at several Impark parking garages to inform the public about the company's unfair treatment of its workers.  Workers also wore buttons in support of six of their co-workers, who were improperly terminated last year.

Impark is accused of committing several violations of federal labor law, including the unlawful terminations.

Impark contracts with the City of Seattle to provide parking for city employees and the public. Workers are asking the public to contact the Mayor's Office at 684-4000 and urge the Mayor to end the dispute.

Impark employees are fed up. Workers don’t want to inconvenience their customers, but Impark is leaving them little choice.

"They're treating us unfairly so we got together," said Joe Castillo, a Shop Steward who has been with the company for three years.  "We're a family, a big group, and we're not going to take this abuse.  We're standing up for our rights - that's what we're fighting for."

Workers at Impark voted overwhelmingly to join Teamsters Local 117 last summer.  Since then, the company has retaliated against employees and fired Union leaders.

The Union and the company will meet again on Monday to discuss the firings.  We will keep you posted as the situation develops.

Sign in with or
Don't have an account? Click here to create one.
Please check your e-mail for a link to activate your account.
No recent activity
Teamsters at Impark Unanimously Authorize Strike
Teamsters Leaflet at Several Impark Locations Downtown
TEAMSTERS POWER