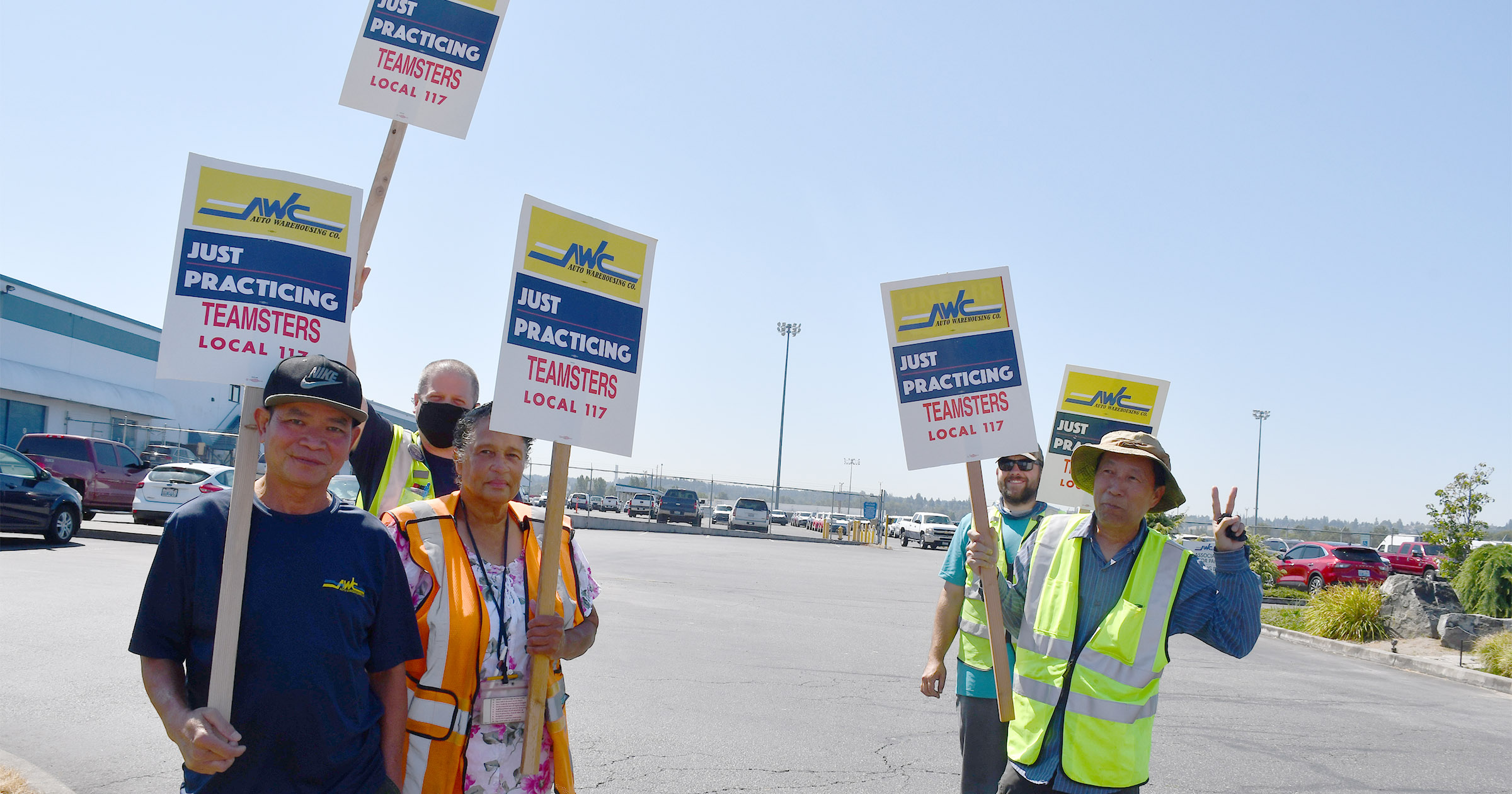 Teamsters at Auto Warehousing Co. take a stand on the street outside their facility.

Last Thursday, Teamsters at Auto Warehousing Company grabbed their picket signs and took it to the street. Fed up with their employer’s disrespect, Teamsters walked out during their lunch break on a practice strike protesting their company’s unfair bargaining tactics and attempts to push skyrocketing healthcare costs onto workers.

“We are just trying to get the company to bargain with us in good faith,” said Charles Chronister, who goes by Randy, a Teamsters shop steward who works in shipping and receiving at Auto Warehousing Co. “I have given this company 13 years of dedicated work, but it doesn’t feel like we are respected. We are out here practicing because we need to stand up for ourselves and our families.” 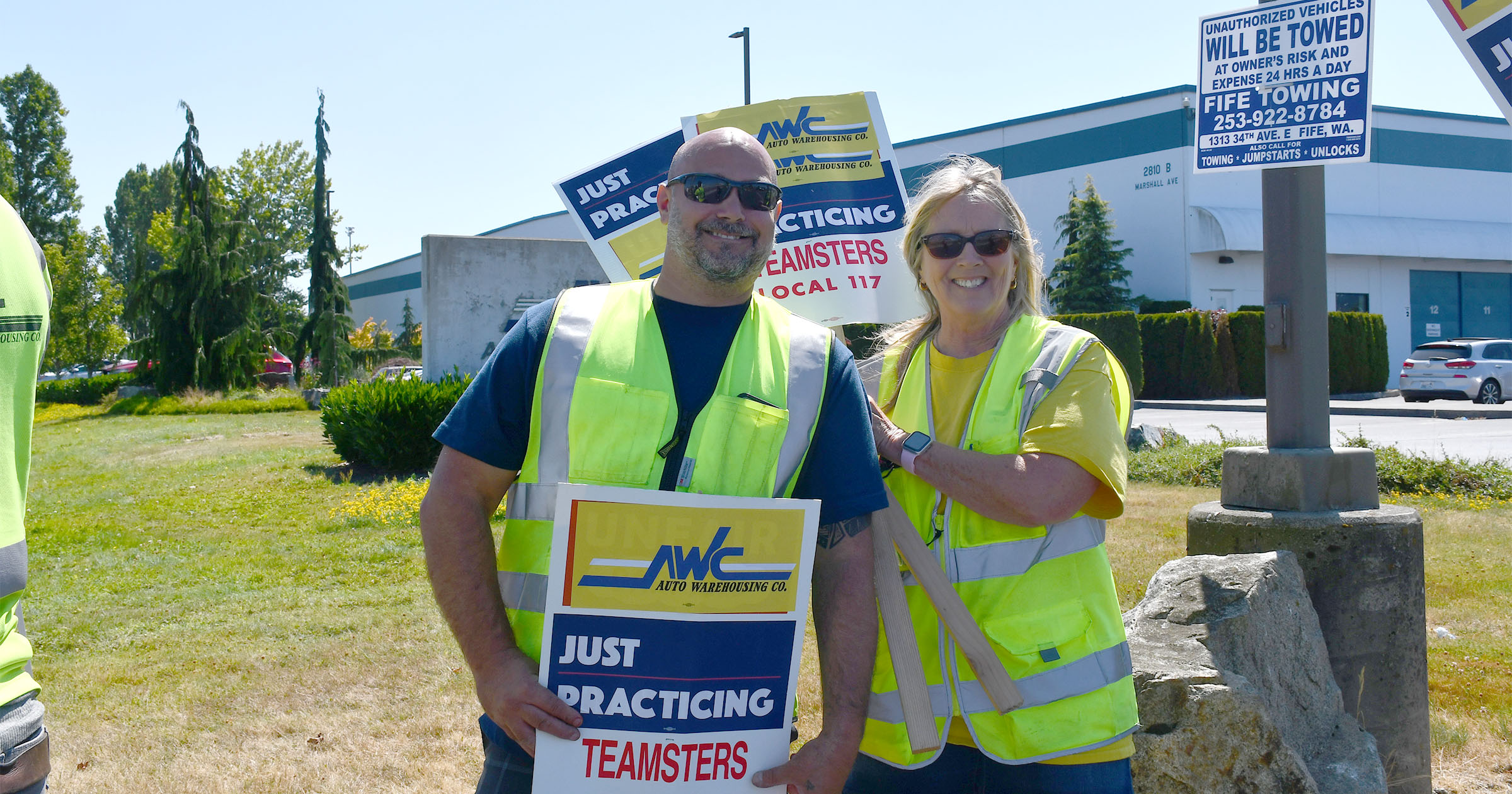 Teamsters at the Tacoma location perform specialized accessory installation on Mazda, Kia and Mitsubishi vehicles shipped as far as Texas.

The company, headquartered in Tacoma, relies on high-quality, skilled labor of Teamsters to provide services and installations for vehicles distributed across the nation. A Teamsters strike would disrupt deliveries of Mazda, Kia and Mitsubishi to dealerships all across the Pacific Northwest and shipping hubs in the Midwest.

Teamsters at Auto Warehousing have never been busier, even through the slower months of the pandemic, which is yielding record profits for the company. Their outstanding work has recently earned Auto Warehousing Co. an Elite Club Service Award from Kia Corporation, yet the company is now proposing a hike on healthcare costs, doubling to tripling what workers currently pay. Even more insulting is the company’s wage proposal which will barely cover the increased cost of healthcare.

"We are out here practicing because we need to stand up for ourselves and our families." 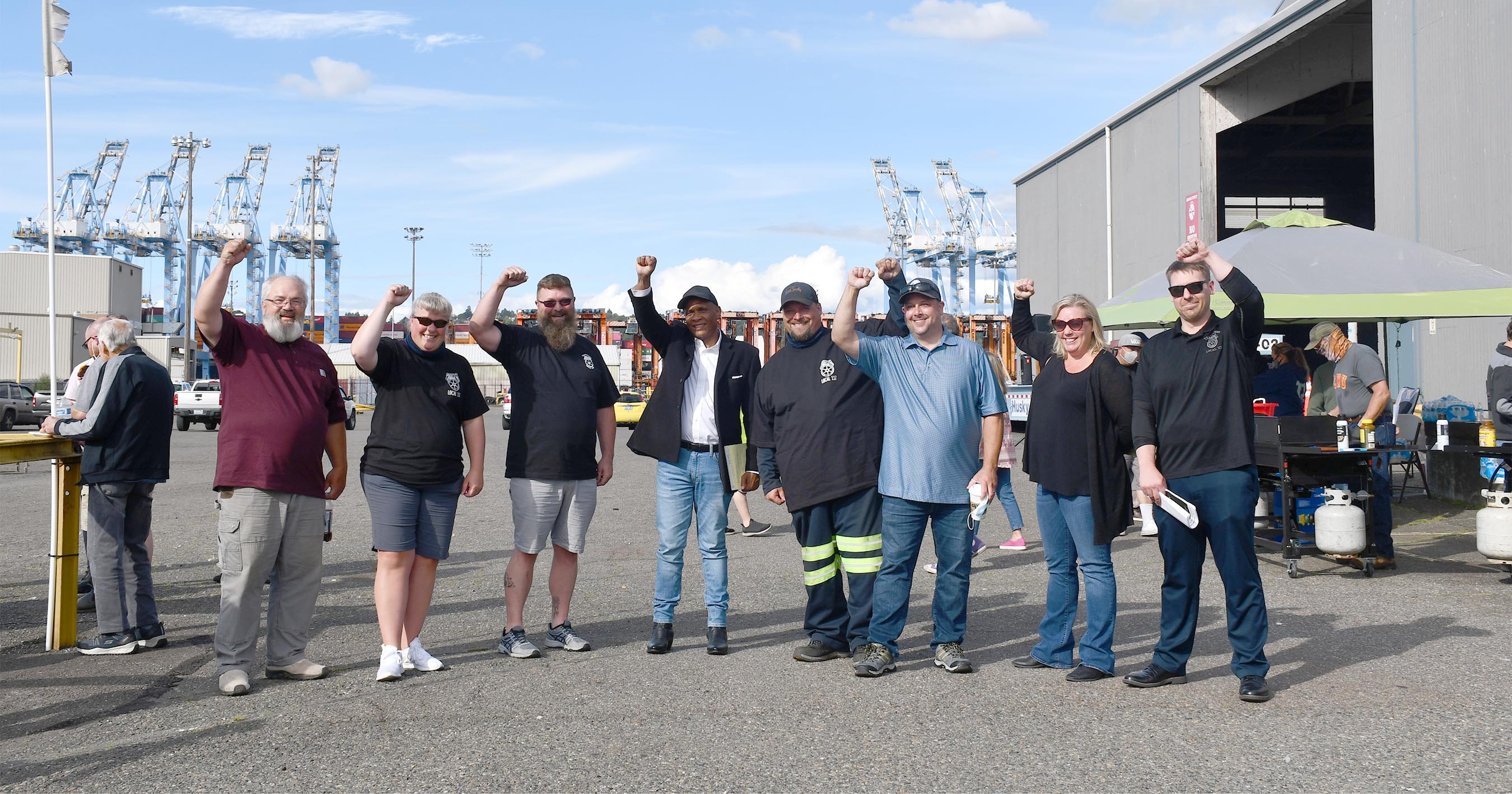 Auto Warehousing Teamsters shared their concerns with their Sisters and Brothers at Longshoremen’s Local Union 23 who were outraged by the company’s treatment of their union counterparts and stood united in their support.

“Your problems are our problems. We 100% stand by you,” asserted Vance Lelli, President of Pierce County Central Labor Council and a longtime member of ILWU 23.

At Port of Tacoma, longshoremen drive cars off ships from Asia and deliver them to the Auto Warehousing facility for final processing and loading on to trucks and railcars. They have a long history of supporting striking Teamsters 117 members.

“We know the car industry is counting on our members to get new cars to consumers because of recent supply chain problems.  We don’t want to strike, but it’s good to know the longshore union has our back. Solidarity on the waterfront is important.  The company should recognize the value our members bring to the company,” said John Scearcy, Secretary-Treasurer of Local 117.