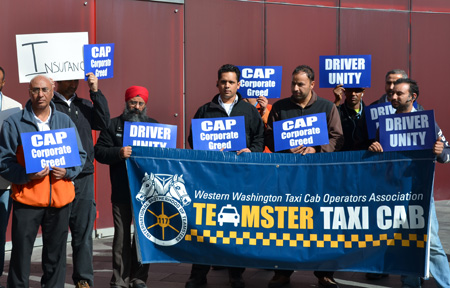 In accordance with King County regulations, taxicab operators must abide by for-hire County licensing requirements; they must undergo annual criminal background checks, pass periodic physical exams, pass an English language test, participate in “ride-alongs”, and pay all fees associated with each exam or training amounting to hundreds of dollars each year. If they do not comply with these regulations, they risk fines of $1,000 and up to 90 days in jail.

Uber drivers are not subjected to the same safeguards, requirements, and penalties, the complaint alleges.

“It’s hard enough to run your own taxi business when the city and the county nickel and dime us every step of the way.  Now you have Uber coming in from out-of-state.  They’re funded by Silicon Valley and Wall Street, so they’ve got the resources, but they’re refusing to pay the price for doing business, and they’re refusing to follow the rules. It’s bad for our community, and it’s not safe,” Cheema said.

The complaint also contends that Uber is in violation of state law that regulates privately operated limousine transportation services.  Rather than requiring customers to initiate service at a time and place different from the customer's time and place of departure as is required under statute, Uber permits customers to make arrangements to immediately engage their services. If WWTCOA members were to provide similar limousine transportation services without satisfying the requirements of state law, they would be subject to monetary penalties.

The Western Washington Taxicab Operators Association (WWTCOA) is a not-for-profit membership association that “promotes fairness, justice, and transparency in Seattle's heavily-regulated taxi industry.”  The WWTCOA works closely with Teamsters Local 117 to ensure that taxis have the resources they need so that they can speak with a unified voice and build a better life for themselves and their families.