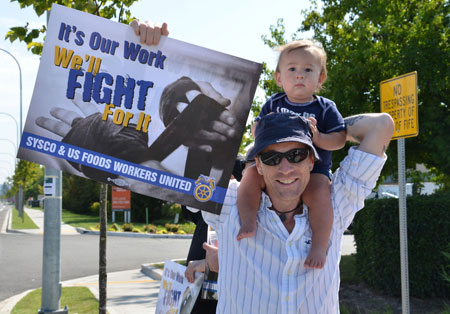 Dozens of Local 117 Teamsters rallied in front of Sysco and US Foods warehouses in Fife and Kent yesterday in a coordinated Day of Action to draw attention to the proposed corporate merger of the two largest food service companies in the country. Similar rallies took place at locations across the country.

"There are a lot of unanswered questions about the merger," said Tracey A. Thompson, Secretary-Treasurer of Teamsters Local 117.  "So far, Sysco has not been forthright about how its acquisition of US Foods will impact jobs, competitiveness in the industry, and consumers.  Our members have worked hard to build these companies into immensely profitable food conglomerates - they deserve answers."

Local 117 members at US Foods and Sysco were joined at the rally by members at Fred Meyer, Lineage Logistics, and Davis Wire. Teamsters at both locations distributed leaflets and waved signs to ongoing traffic that read, "It's our work - we'll fight for it!"

"A big issue for us is job security - there is always the threat of them taking our work and moving it to another warehouse," said Wayne Schuler, a Shop Steward who works in the freezer at US Foods.

Sysco’s $8.2 billion buyout is currently under review by the Federal Trade Commission and a multi-state committee of attorneys general, tasked with examining the effects on competition.

Sysco and US Foods are the two largest providers of food service supplies in an industry built on contracts with not only restaurants, but also multimillion dollar federal and state deals with the military, schools and universities, prisons and other agencies as well as airports, hospitals and hotels.

Teamsters represent more than 7,600 Sysco warehouse workers and drivers and nearly 4,000 at US Foods covering 70 warehouses in the U.S.