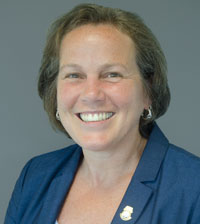 When the magnitude of the Oso mudslide tragedy became apparent, a group of Washington State correctional officers, of their own volition, answered the call for volunteers to help in the disaster relief effort.

These included Teamsters like Sergeant Jimmy Fletcher and Officer Tom Gent. The disaster called into action thousands of our country’s finest – men and women who make their careers serving the public. In all, 211 agencies – local, county, federal, tribal, charitable organizations, as well as the business community - were involved in the relief effort.

“The heart of these people is incredible – they’re not giving up,” said Stephanie Shook, a records specialist at the City of Pacific Police Department and also a Teamster, who was dispatched to the scene in her capacity as a public information officer.

After several days of exhausting work, Shook volunteered to redeploy over the Easter holiday weekend to escort the local and national media who were covering the incident. She willingly signed up to return, even after she had fallen into a sinkhole the week earlier and had to be rescued by the National Guard.
Like the other brave men and women who responded to the call, she risked her life to aid the families stricken by the disaster.

Shook, Fletcher, and Gent are no strangers to service. As public safety professionals, they have made a career of putting their lives on the line to protect our communities. For them, serving the public is second nature. When disaster strikes, as it did in Oso, they answer the call of duty, in their official capacity, or as volunteers, making personal sacrifices to the benefit the greater good.

The first week of May is Public Service Recognition Week (PSRW). The theme for PSRW 2014 is Proud to Serve. Public servants deserve our deep gratitude for the work they do in providing vital services to our communities. They clear our streets during snow emergencies, maintain our roads, clean up our parks, and keep our communities safe.

Too often public employees are the target of unwarranted criticism, but when disaster strikes they are the first to respond. We need to honor them.