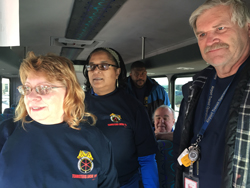 The drivers marched on Google offices in Kirkland on January 6 insisting that the company recognize their union.

Congratulations to the drivers - new members of Teamsters 117.  Let's welcome them to our union!