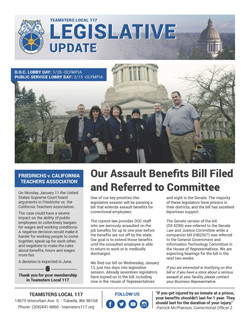 We're a week into legislative session, and already we've made headway on one of our key priorities - extending assault benefits for members at the Department of Corrections.

Seventeen legislators have signed on to our bill, nine in the House and eight in the Senate

You can read more about our Assault Benefits bill for DOC and our other legislative priorities in our Teamsters 117 Report from Olympia #1.

Throughout session we will be updating you on policy issues that could impact members of Teamsters Local 117. We will also let you know how you can get involved.

You should also be aware that we've organized two upcoming Lobby Days, one for our DOC members on January 26 and a second Public Service Matters day on February 15.