It’s one of the most secure, well-funded defined benefit pension plans in the country. 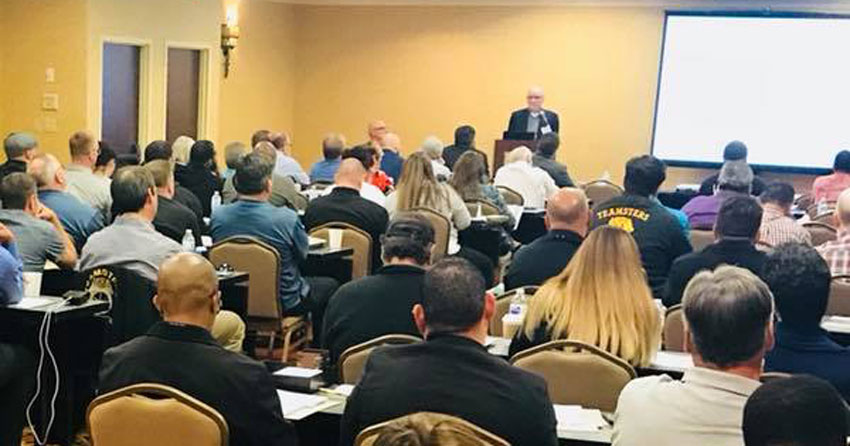 Union officials, representatives, and members from around the West gathered to learn more about the power of the Teamsters pension plan.

It’s one of the most secure, well-funded defined benefit pension plans in the country. The Western Conference of Teamsters Pension Plan, commonly known as the Teamsters pension, provides retirement security to over 200,000 active participants in 13 Western states.

Last week, representatives of the pension, including plan trustees, provided a day-long training for Local Union officers, representatives, and rank-and-file leaders from across the West. The goal was to familiarize the group with resources, better assist members, and succeed in negotiations.

The agenda delved into the history of the plan, an overview of the plan’s website, field support, effective bargaining techniques, and the advantages of the plan as compared to a 401(k).

Matt Collins, a shop steward at Fred Meyer, was one of the Local 117 members in attendance. “I was able to get critical information about the pension that will help me better serve my fellow Teamster brothers and sisters,” he said.

"I was able to get critical information about the pension that I can take back to the shop floor..."

Another member who joined in was Anthony McKinney, a shop steward at SuperValu. McKinney, together with fellow bargaining committee members, just finished negotiating pension increases in their contract.

“It’s important to get information out to the younger generation,” he said. “There is an information gap with people who only see the now-factor of life and may not be thinking about the future of their families. I will bring this back to my facility and become an advocate to make sure that all of us fully understand how important it is to keep the pension rates going up from contract to contract.”

James Borsum, who joined our Local's rep staff last year, said he was grateful for the training as well: “I get a lot of questions on the shop floor about how our pension compares with other pension plans. Fortunately, I can report back to our members that our pension is in great shape and what we need to do to keep it strong for the future.”

The Western Conference of Teamsters Pension Plan is managed by a Board of Trustees and administered by Northwest Administrators. If you want information about your estimated benefit under the plan, you can set up a personal pension appointment by calling Diana McDowell at 206-441-7470. To set up a pension meeting for you and your co-workers, talk to your union representative.