Local 117 members from all corners of the state gathered at the union hall in Tukwila earlier this month for the inaugural class of our new Teamsters Leadership Academy. 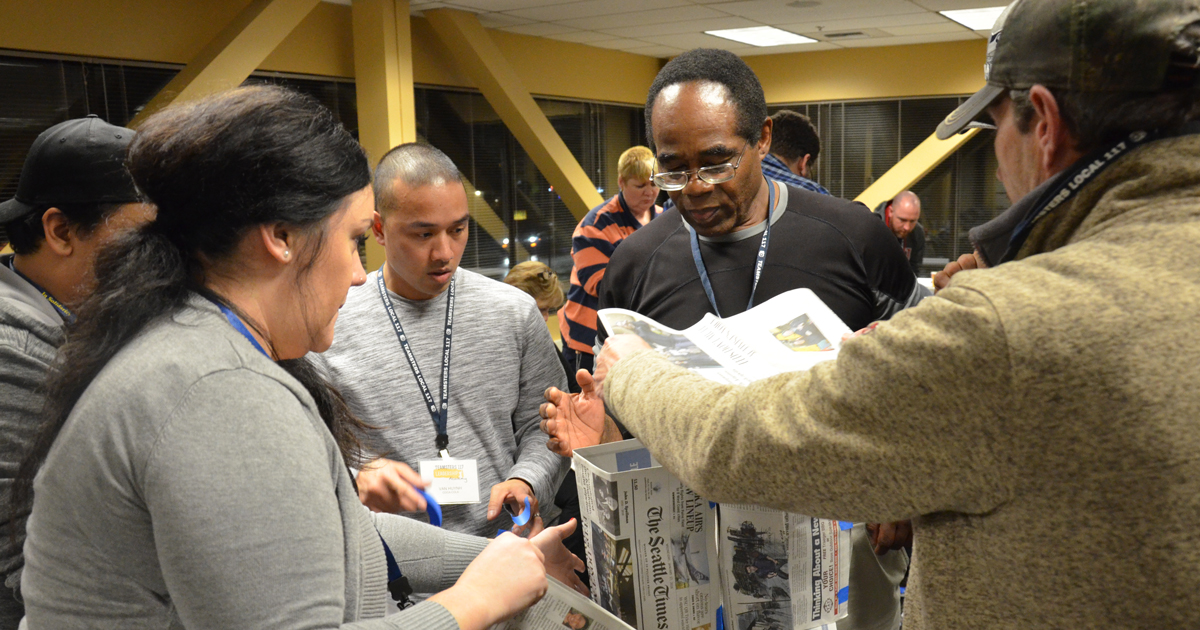 Members from the inaugural Teamsters Leadership Academy participate in a team building exercise on January 17.

Local 117 members from all corners of the state gathered at the union hall in Tukwila earlier this month for the inaugural class of our new Teamsters Leadership Academy.

The program is a central piece to one of our union’s key strategic priorities: to invest in member leadership and development.

“I’m incredibly excited to work with all of you,” said John Scearcy, Secretary-Treasurer of Teamsters 117, as he welcomed the group.  “Our goal as Teamsters is to build unity and power for working families. You are on the forefront of helping realize that goal.”

"The sense of unity was wonderful."

In the first meeting, members discussed the qualities of effective leadership and reflected on the importance of leadership as it relates to working together as a team. They also engaged in a “problem tree” exercise where they identified and analyzed issues in the workplace.

A total of 37 members enrolled in the program from a pool of over 250 Teamsters who were identified by their co-workers as natural leaders. Teamsters from several private sector employers, public sector, and the Department of Corrections will be participating in the course.

“The sense of unity was wonderful,” said Noelle Guenette, an officer at the Washington Corrections Center for Women. “All of the energy in the room was positive and everyone worked well together. In the end, we all have the same goal – to have a union that protects us in the workplace and makes sure everyone has a living wage and improved opportunities.”

The nine-month program involves monthly classes that cover topics such as workplace rights, mapping, political action, member mobilization, communications, and Teamster history. A central part of the curriculum also involves a workplace project that members will select and address over the coming year.

If you missed the opportunity to be a part of the academy this year, be sure to talk with your union rep about joining us in 2019!