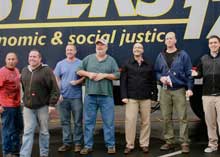 People against Tacoma Proposition 1 say it will cost jobs. I couldn’t disagree more.  Prop. 1 will create more than 300 good, family-wage jobs in Tacoma. That’s why unions like Teamsters 117, the Pierce County Central Labor Council and others have endorsed it. Unions aren’t the only ones supporting it, though. Prop. 1 has the support of countless local businesses. Good roads and safe neighborhoods are important to everyone.

I should know; I’m a 911 dispatcher, and I take calls from people in Tacoma who need emergency services when they run over potholes on our broken streets. People call all the time about their flat tires and broken axles, but 911 can’t help them. Prop. 1 can.

The reality is this isn’t taxation without representation. Tacoma voters bought, own and operate their power company. Those of us outside the city get 30 percent cheaper power than other competition; that is a real benefit. I live in Midland and I don’t even get to vote on this. But if I could, I’d certainly be voting yes. I’m a Tacoma Power customer, I enjoy cheaper power and I drive on Tacoma streets every day.Even though I can’t vote on this, it will certainly impact me and the other folks who drive in Tacoma every day. Please vote yes for safe streets in Tacoma.