Wonder What's Happening in Oly? Check out our Legislative Update 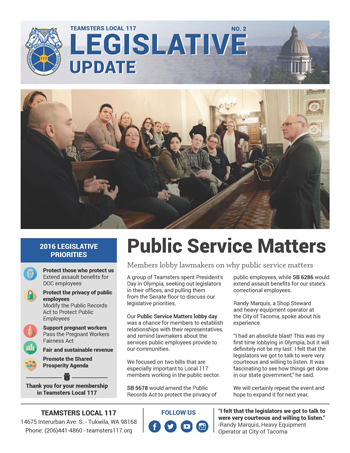 It's been an exciting session in Olympia so far.

Lots of Teamsters have visited the State Capitol to talk with their legislators. We've had two well-attended lobby days and a signature success - the unanimous passage of our proposal to extend Assault Benefits for correctional employees in both the House and the Senate.

Once the bill is reconciled by the two chambers, we're expecting that the Governor will sign it into law in the next several weeks.

Check out news about our Assault Benefit bills as well as updates on other priorities in the new issue of our Teamsters Legislative update.

You can download a PDF of the update here. For print copies, talk to your Business Rep.

This is the second print update that we have published this session. We anticipate at least two additional issues before session wraps up in March. Stay tuned!