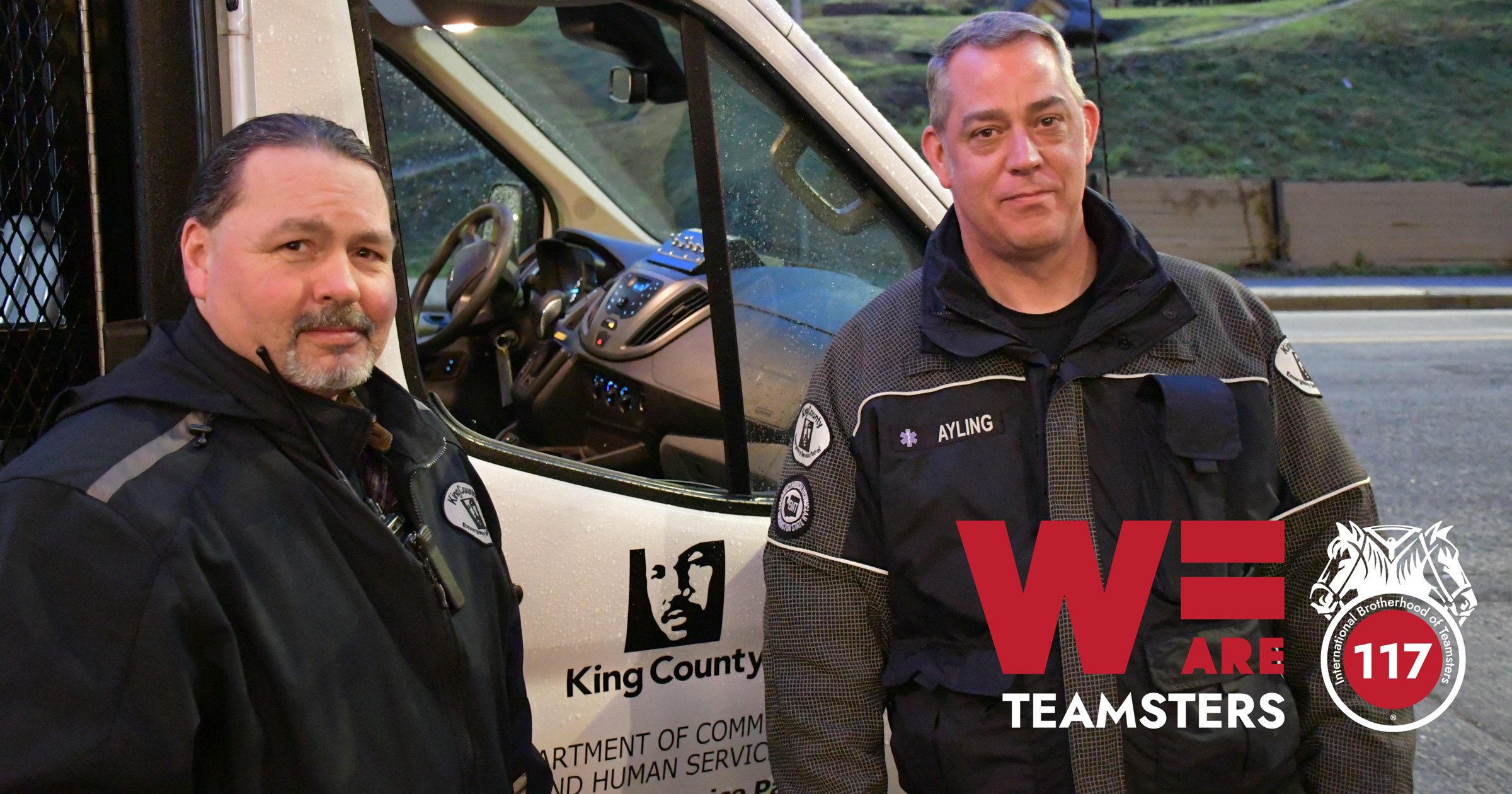 Mike Wells (l) and Todd Ayling (r) check up on people struggling with substance abuse and connect them with support services.

Teamsters Mike Wells and Todd Ayling are in the business of saving lives. The two chemical dependency screeners, employed by King County, make connections with people in crisis and come to their aid when they need it most.

In the last six weeks, they have revived two people by administering Narcan, a medication that treats opioid overdose emergencies. It’s a controversial practice that the two men swear by. They say it keeps people alive.

“Had we not come by at the right time, there’s a good chance that young man would have not survived,” Wells said, referring to a recent overdose incident in Seattle’s International District.

“Yeah, he was in a lot of trouble,” confirmed Ayling. “He was what people in my last job called CTD or circling the drain.”

Ayling is a former firefighter and a trained EMT. When assessing how to aid a person in crisis, he looks for telltale signs. He checks pupil dilation, heart rate, whether the person’s respiratory drive is compromised, and he scans the surroundings for paraphernalia, needles, or other people using drugs nearby.

In 2022, the opioid crisis killed more than 110,000 people nationwide, a staggering number, and a one that continues to rise. A report from King County’s Department of Public Health reveals that overdose deaths in the County jumped 20% between 2019 and 2020 and by an additional 39% between 2020 and 2021. The vast majority of these deaths can be attributed to the use of fentanyl, the deadly synthetic opioid.

Ayling and Wells are acutely aware of the ravaging effect the opioid crisis has had on communities, but they try to approach their work without judgement. Their goal, as they see it, is to keep people safe and give them a chance to get cleaned up and back on their feet.

Chemical dependency screeners, they say, strive to connect with a population most people ignore.

“It’s a constant state of relationship building,” Ayling affirms. “We go in and let them know that we see them.”

A quarter of those engagements, they estimate, result in a transport somewhere safe. They shuttle people to Harborview, the sobering center, or the crisis solutions center. “Even if one of them takes our help, that’s a success,” Wells says.

Empathy is an indispensable quality of the job, which the two screeners clearly possess. They say it returns to them in the form of gratitude from the people they serve. “The reward you get when you’re able to connect with somebody doesn’t show up on your paycheck. It shows up in your heart,” Wells says. 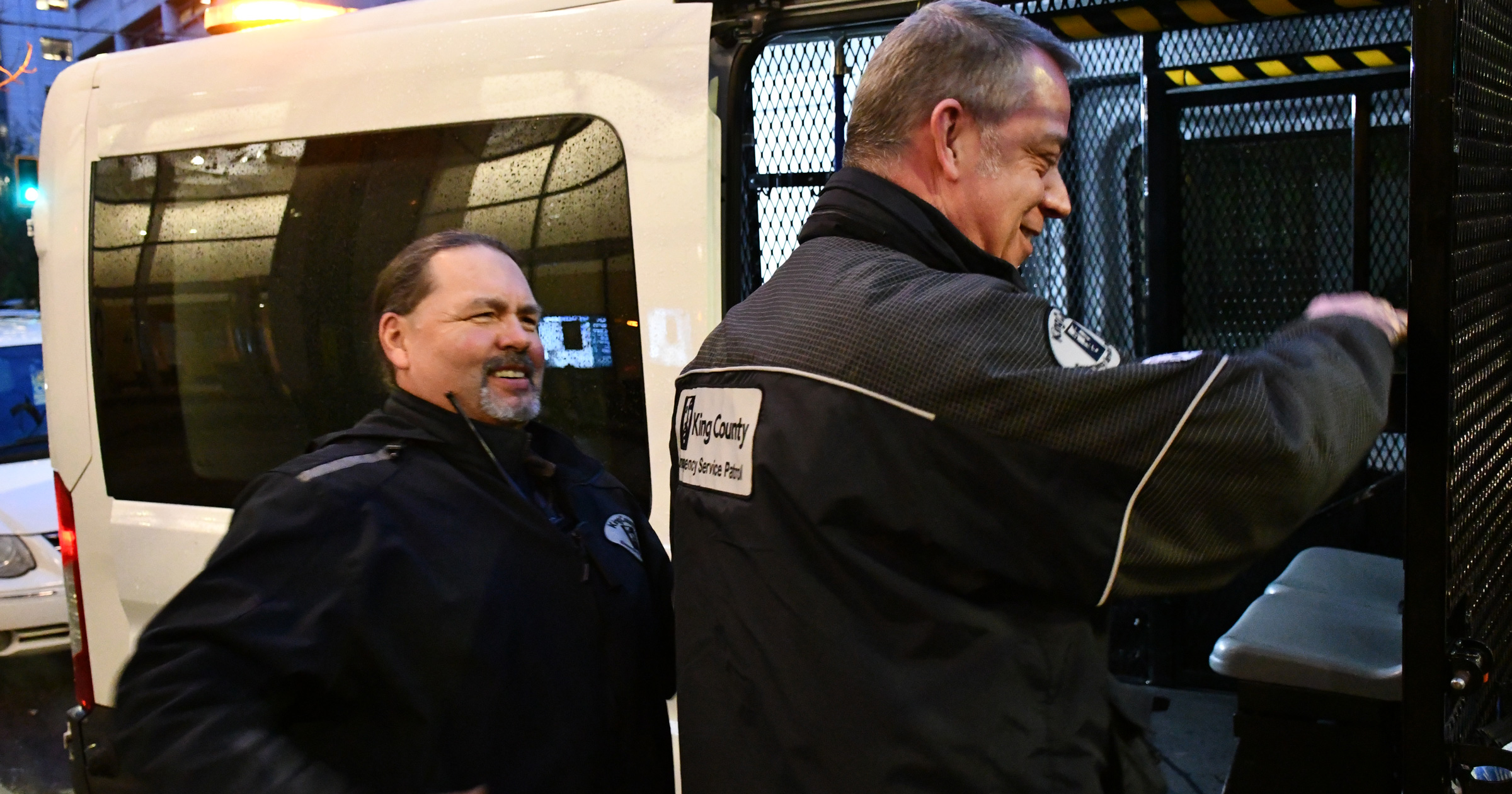 Wells and Ayling share a laugh before heading out on their shift.

Aside from their empathy, there’s another reason the two may be well-suited for this work. Both men are in recovery themselves. Ayling celebrated 20 years clean last May, and Wells has been sober for nearly 15 years. The two got to know each other at a recovery meeting where Ayling, who has been in the position longer, encouraged Wells to apply for the job.

Working side by side, the mutual respect and affection they have for each other has grown. “I love this guy,” Ayling says before launching into a favorite story about his co-worker.

It was a dispatch call to the Seattle Center, where the two screeners encountered a man who was heavily under the influence sitting by the side of the road with a beat-up guitar. Mike, who is a musician himself, struck up a conversation and asked if he could put a tune to it.

Before making their way with the man toward the sobering clinic, Mike plucked a few strings. Soon the men were singing together. It was a song by Everlast called, What it’s Like, which describes the lack of understanding many of us have for people who are struggling with addiction. It goes like this:

We've all seen a man at the liquor store beggin' for your change
The hair on his face is dirty, dread-locked, and full of mange
He asks a man for what he could spare, with shame in his eyes
"Get a job you f*&@ing slob," is all he replies
God forbid you ever had to walk a mile in his shoes
'Cause then you really might know what it's like to sing the blues